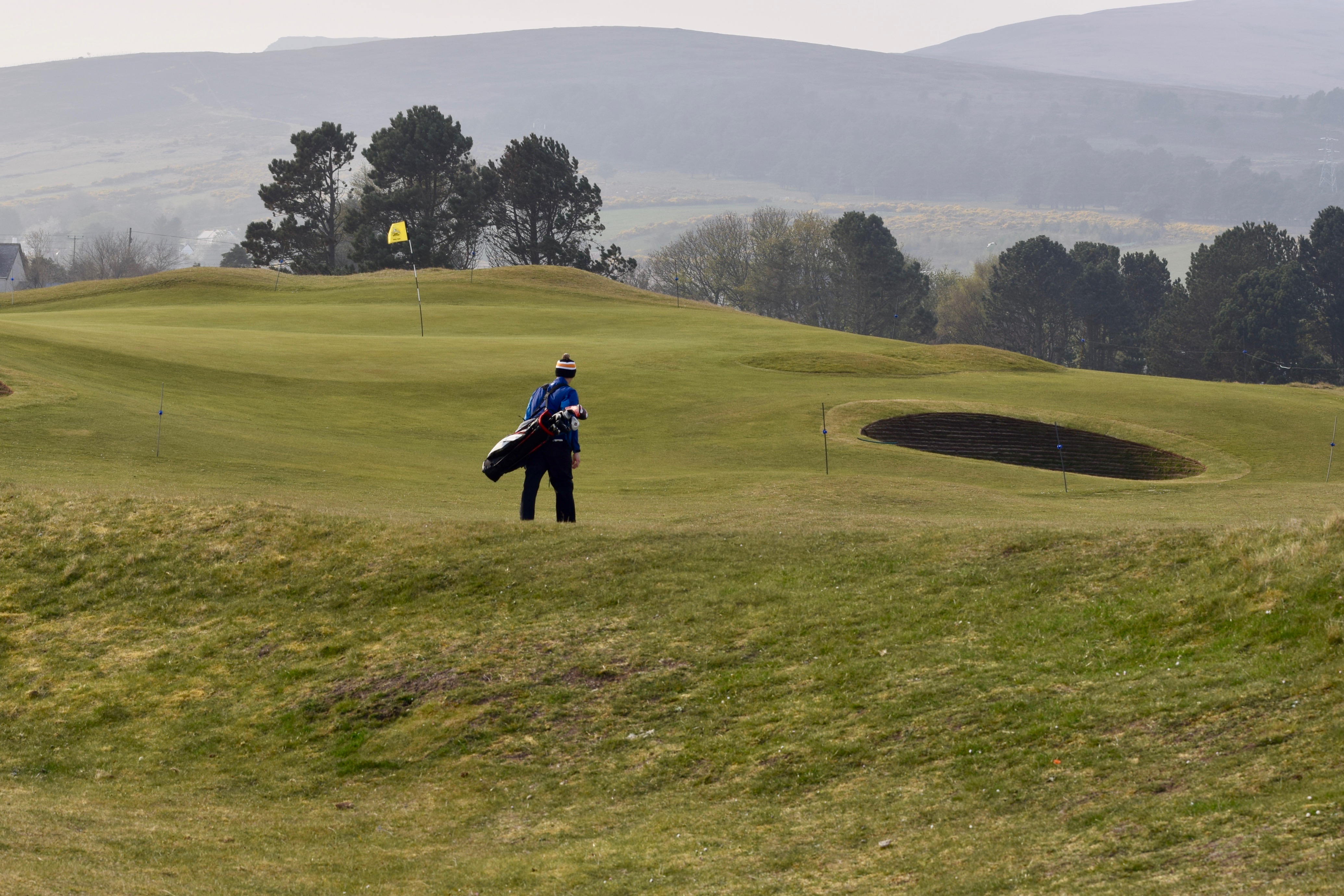 On the first day, we play on the shore of the North Sea.

It is a windy afternoon on the North Sea in northeastern Scotland. It has taken us 24 hours to get here, four flights from Washington, D.C., and ninety minutes of left-side driving.

This was the beginning of the trip to celebrate my 70th birthday, which is in September, a gift from my eldest son, Jason, 42, and his wife, Robyn Greene.

Jason and I share a great love of golf. We are both about 18-19 handicappers, Jason because he doesn’t play that much, job and all, and me because of an ongoing LOFT problem — lack of talent.

But here we are. When Jason and Robyn gave me this gift, it came with this note from Jason that said in part:

“Maybe it will rain the entire trip. Maybe we’ll have more lost balls than pars each day. But even my worst vision of this trip has us together for a week with no care in the world other than getting a small white ball underground — well, and remembering to drive on the left side of the road.”

Brora was to be a bonus round, if we got there in time, after travel from Washington DC through Detroit and Amsterdam to Inverness. But on Tuesday, April 23, we landed in Inverness, at 12:40, were out of airport by 1:30 and drove north in our appropriately named VW Golf, Jason telling himself “left side, left side” at every turn.

We took an accident-caused detour through the exquisite old village of Tain, checked into the Royal Golf Hotel in Dornach and drove north the 30 minutes to Brora and were playing at Brora at 4, on a day it would stay light until 8.

It was a gray afternoon, and windy. And as we played, I remembered the thoughts that came to me as we were flying over the Atlantic:

As I began this trip with my eldest son, I thought about my Dad. Dave Bellamy was born in England, enlisted in the Royal Air Force during World War II, met my Mom while stationed in Canada. Long, dramatic story, but the memory here is that Dad, who died in 1991, at age 70, was a golfer since his boyhood in England.

He loved the game, respected the game, knew all the rules and played with dignity: Never a curse worse than “darn it,” never a loss of temper, always an enjoyment of the round and a post-match analysis that would begin with a good-humored “if only” … if only he hadn’t topped that shot or missed that putt.

You wanted my Dad in your foursome. Dad, who gave up golf for many years while my brothers and I were young and time and money were tight, could play; when he started playing again once his sons were older, he regularly shot in the mid-80s, way better than his oldest son ever achieved.

Anyway, on this trip I wanted to think of Dad as being with us, and wanted to play with a deportment that he would respect, and I did. It brought a sense of calm, to not get upset at a bad swing, or a bad bounce, and in links golf, the bounces are not always fair.

Which brings us to Brora, on the North Sea, a course that dates to the late 1800s but was rendered into its current state in 1924 by noted architect James Braid and largely untouched since. “Here the visitor will enjoy the mixture of bent grass and beach sand,  burn water and gorse in glorious yellow May bloom. There is even a railway” — we saw the train — “that comes into play from the 10th tee.”

We played on our own, virtually alone on the course on a Tuesday afternoon in which dog-walkers outnumbered golfers at least 8-to-1. On the first hole, a dogleg right toward the North Sea, Jason hit his second shot so long that it nearly reached the beach. Naturally, a dog walker spotted it first. “Although I’m not sure you can play it,” he said, pointing into the tall grass. Jason managed a bogey.

The late James W. Finegan described the fairways as “humpy,” and they are that. The terrain undulates dramatically; there are many blind shots, and even a ball that stays on the fairway can be hard to spot, in the swales. With the wind, that always seemed to be in our face on the front nine, it was quite the challenge.

Brora is known for the sheep and cattle that graze there still, but we saw none, it being the birthing season. But the electric wires to protect the greens were still in place, the scorecard warning us “please do not stand on electric fences,” and advising that “electric fences are immovable obstructions.”

From the yellow tees, 5,951 yards, I shot 101, Jason 103; I had one par and lost one ball, I believe that wound up in a burn.  At dusk drove back to Dornach, very happy, after months of planning, to be playing golf in Scotland.