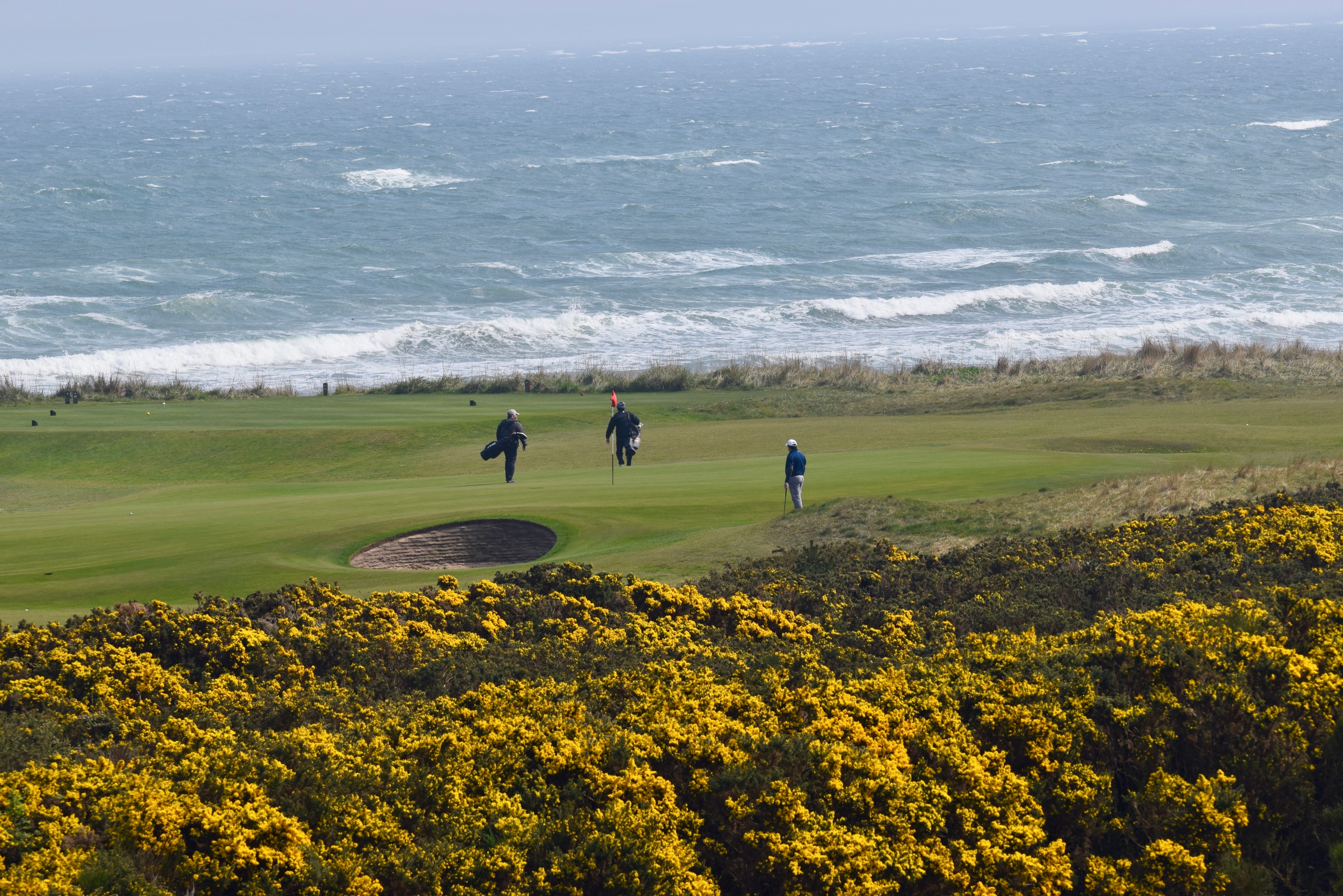 On the second day, we play the No. 2 rated course in the world.

We woke up on the morning of Wednesday, April 24, at the Royal Golf Hotel, in view of Royal Dornoch Golf Club, a few steps from the clubhouse. It was sunny, the wind whipping through the flags by the first tee.
The starter was jolly, sending us off with the reminder, “Golf is a terrific thing.” But not before imparting his wisdom on the par 3 No. 2 hole: “It’s a wonderful hole, or it’s a pure bitch.”

What a beautiful place, on the Dornoch Firth, the course going out north on an upper level, and then returning just above the beach on the firth. The gorse was in full bloom, bright yellow, and now the possessor of two of my TaylorMades. 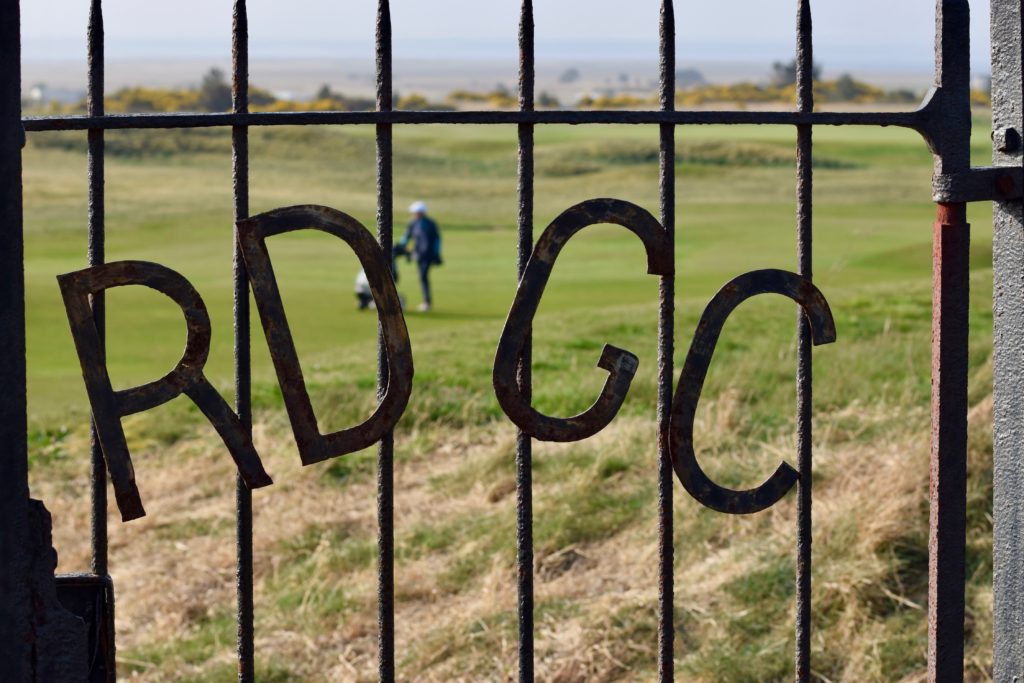 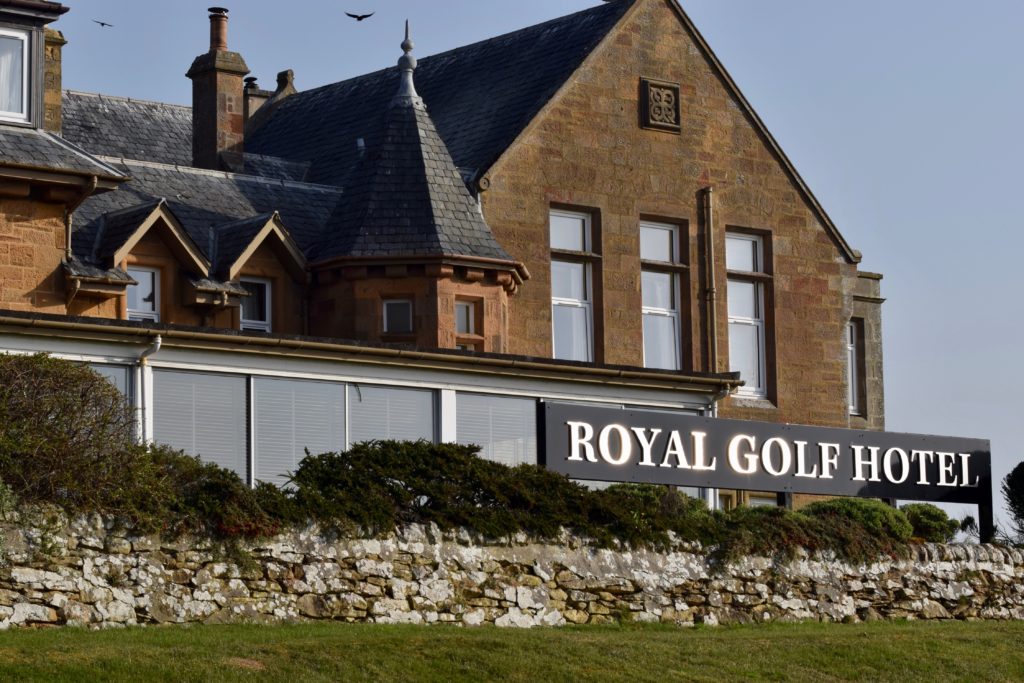 Golf has been played on this stretch of linksland on the Dornoch Firth in northeast Scotland since 1616. The club itself was founded in 1877. Old Tom Morris laid out holes here, as did John Sutherland and J.H. Taylor; Donald Ross, born in Dornoch, was the club’s professional and greenskeeper in the 1890s.

The course guide has inspirational messages, written by a minister. “In the beginning,” said the note on the first hole, “draw breath and enjoy the clean scoresheet and all the possibilities that lie ahead. Choose now to take one step at a time and enjoy what that step holds.”

Our scoresheets weren’t clean for very long. The course is wonderful, spectacular; the greens are difficult, most elevated like inverted saucers, so not welcoming to bump-and-run; you have to be precise with wedges.

This is particularly true of the famous second hole. Featuring a steep fall-off all around the green that penalizes any errant tee shot, the hole inspired Tom Watson to fondly observe that the second shot to Royal Dornoch’s second is among the hardest shots in golf. After both of us missed the green, Jason managed to scramble for a solid 4, while I explored the green from various sides en route to a 6. A few holes later, our scores were reversed at the par-3 sixth, which has a severe drop off on the right side of the green with nothing but tight lies at the bottom.

“The course opens before you,” the guide tells you at No. 3. “Sea, hills, sweeping fairways. Pause to admire the natural beauty around you and appreciate what the creator and humans can do together.” 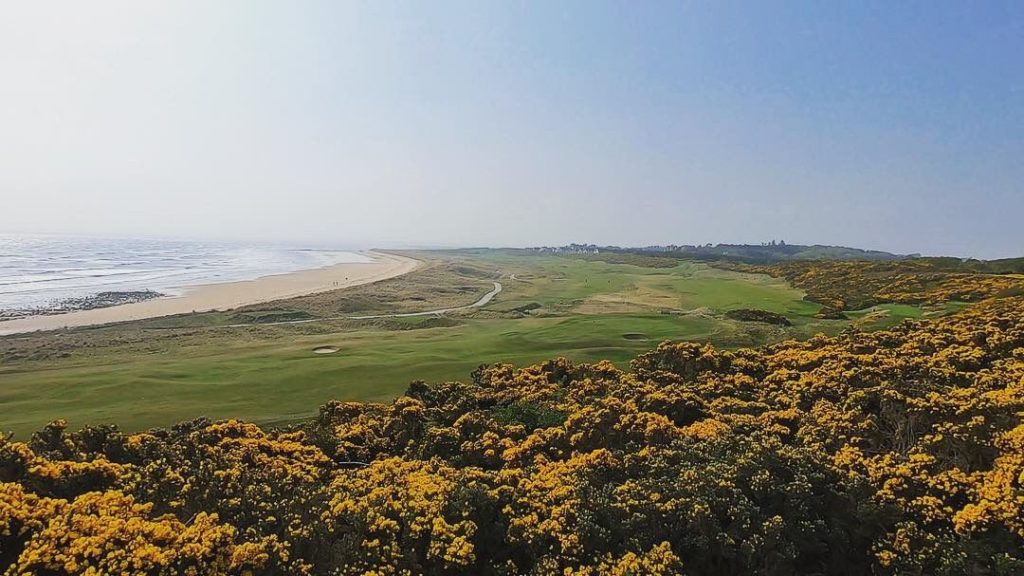 From the yellow markers (6,267 yards) it was playable enough that day, and I credit my one-par 100 (with a three-putt on 18) more to unforced errors than the challenging course itself. From the course guide:

“Choose your club carefully and think of the choices you have made in life. You have to live with the consequences.”

Which led me to think, as I played in Scotland with my oldest son, at his invitation, at one of the most wonderful golf courses I have ever played, that I must have made a few good choices in my life. 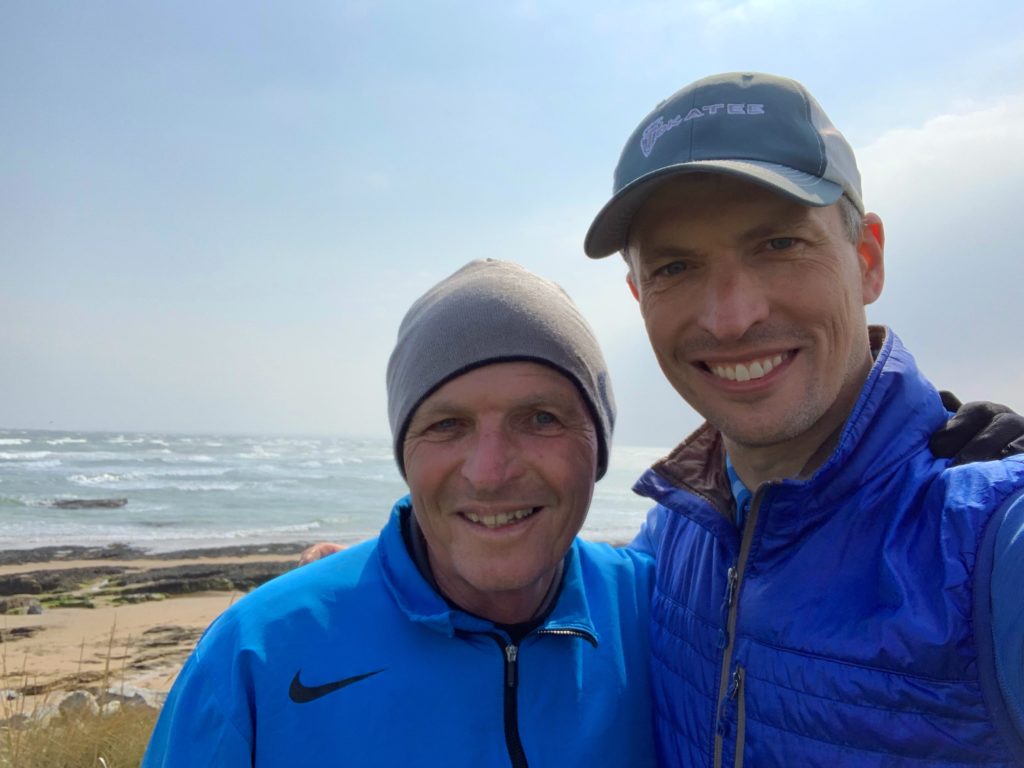 From the course guide:

“As you prepare to tee off (on No. 18), think of the number of people in the last 400 years who have stood where you are. Regardless of your round, be grateful for the energy to play and for the company and the scenery.”

Lunching in the clubhouse after the round, we sat a table away from two old Scots golfers — Statler and Waldorf, we dubbed them — who spent the entire time talking passionately about golf, how it was decades ago, how it is now, both clearly still in love with the game.

Around 3, we set off for the 5.5 hours drive to Machrihanish on the Atlantic Ocean on the southwest tip of the Kintyre Peninsula. Left side, left side. We drove along Loch Ness, through the spectacular Scottish Highlands, past stone fences, ruined castles and cathedrals, through villages like Oban, and smaller, that seemed such a different world.

Sheep grazed on fields; at one point, on the narrow country road, Jason slowed because a ram had escaped the pasture and stood in the roadway. We arrived around 8:30 at an old favorite of mine from my writing trip three years ago, the Ugadale Hotel in Machrihanish, overlooking the historic first tee at Machrihanish Golf Club, and caught a later dinner in the Old Clubhouse Pub.

Rain was in the forecast for the next day, but we had hopes of playing 36 holes at Machrihanish Dunes.

“Let the challenge excite you — and rise to it. Life is too short not to have times when you push yourself to your limits.”