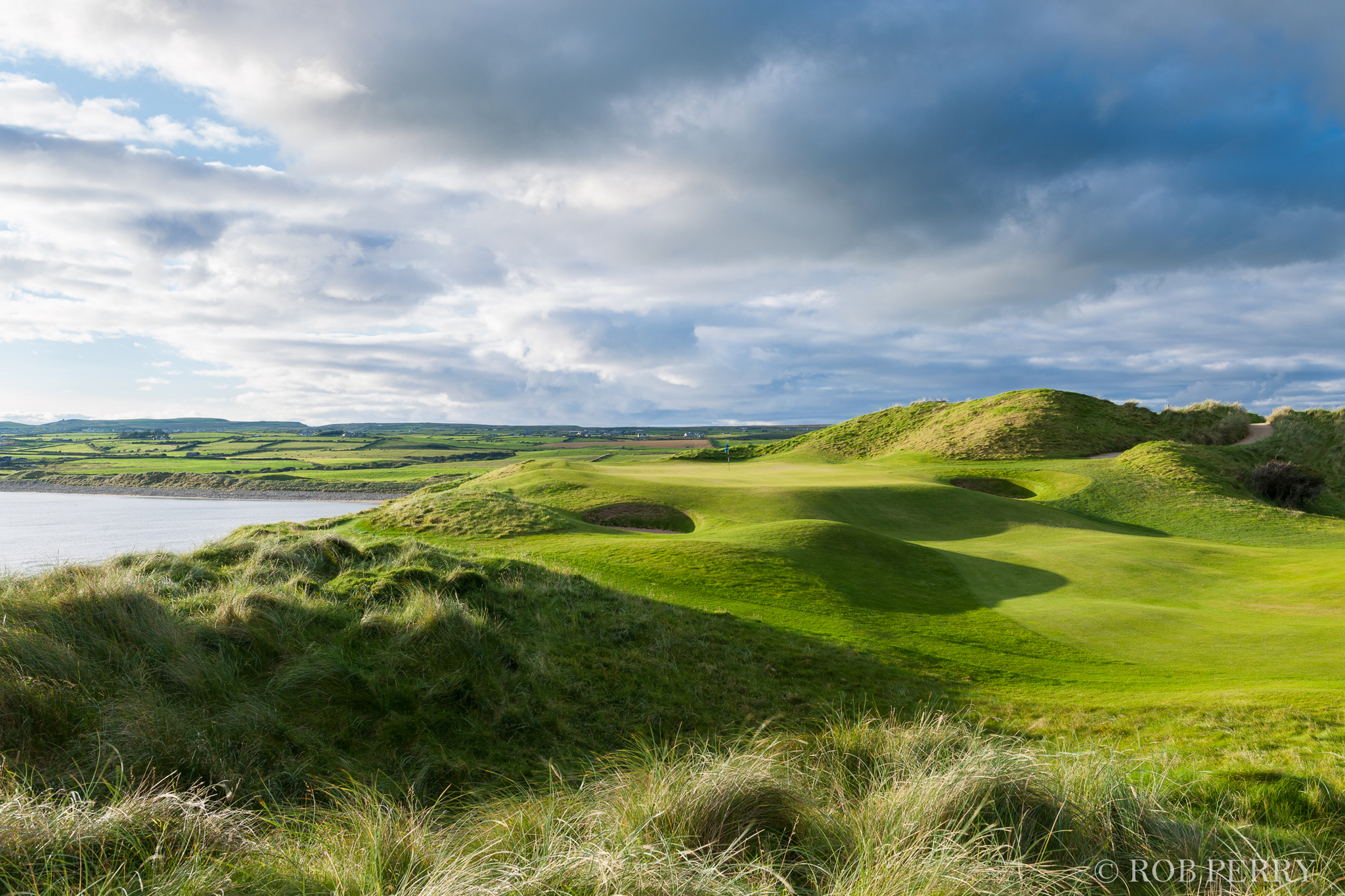 First in a series on golf in Ireland by the veteran golf writer, with photography by Rob Perry

My first trip to Ireland to play golf was 25 years ago. It was four old college roommates from Berkeley turning 50, getting together again, driving a rent-a-car on the other side of the road while shifting with the left hand, paying $35 for a round of golf, be it Royal County Down or Ballybunion.

There weren’t many Americans around back then. We stayed in B&Bs not resort hotels, ate Irish breakfasts that stayed with us through 18 holes, and at day’s end celebrated Irish music and Irish ale.

It was quaint then, and, I hoped, on the verge of my latest trip back in late August and early September, it still would be.

One of the boys from Berkeley wanted to know why, at my age, would I go that far to play golf in bad weather on courses that are too difficult? And on courses that must be walked?

I mean especially now that we have in the U.S. our own links courses, places like Bandon Dunes on the ocean and remote inland places like Gamble Sands and Sand Hills and Ballyneal, in the hinterlands.

I wondered, too, about the wisdom of one final trip to the soul of the game as our flight from Seattle to Chicago had to refuel in Rockford, Ill. A thunderstorm had temporarily closed O’Hare and we missed our connecting flight to Shannon Airport in Ireland.

I also knew we were leaving Seattle’s prime summer weather and its golf season for the certain wind and wet of Northern Europe.

Then I remembered that this wasn’t a golf outing, but a pilgrimage. That it was about antiquity and authenticity more than sun and shorts.

As far as the courses being too difficult for 75-year-olds, I knew playing from the right tees would help and so would the firmness of fairways and with it the fundamentals of bump-and-run golf.

What I hadn’t figured on was that while the Americans were dramatically developing their new links-like courses, the Europeans were retooling their own classic links.

And being very caring doing it. They wouldn’t be adding carts – or buggies, as they call them – or cart paths or even cart girls.

They were adding driving ranges when they could, rebuilding clubhouses, even rebuilding a few holes and in a couple of cases rebuilding the whole course.

Under the auspices of Tourism Ireland, we were spending our first few nights in the village of Lahinch, in County Clare and about 90 minutes from the Shannon Airport. Lahinch is a grand old course with perhaps the greatest architecture pedigree in the game.

Now celebrating 125 years of golf, Lahinch Golf Club was first discovered among the dunes south of the famed Cliffs of Moher by none other than the great Scottish player and architect, Old Tom Morris.

Today, the beauty of Lahinch is that two of Old Tom’s most exotic holes remain untouched – the par-5 Klondyke hole and the par-3 Dell hole.

They both contain the serious commitment for a blind shot that must carry a dune to a flag you can’t see.

In the 1920s, Alister MacKenzie remodeled the course, MacKenzie of Augusta National and Cypress Point fame.

Then, in the ‘90s, with Americans beginning to populate the courses, Lahinch decided to do one more sprucing up of the layout, this time by English architect Martin Hawtree.

Hawtree made improvements that made the course more attractive and playable. And better.

For years Hawtree has been the chief architect of the Royal & Ancient. He did a makeover of the recent British Open site, Royal Birkdale. He was also entrusted with making subtle changes to the Old Course at St. Andrews.

At Lahinch, he re-routed four holes and added two new par-3s, the 166-yard 8th and the 170-yard 11th, both set deep in the impressive sand dunes. In all, 16 tees were re-built and 14 greens completely re-shaped, restoring them to their original character conceived by MacKenzie.

As the club noted, “Hawtree wisely left the magical ‘Klondyke’ and ‘Dell’ holes alone. The improvements include the re-routing of holes towards the Atlantic Ocean and the amplification of trouble around the greens where bunkers, swales and mounding now make approach shots, from any distance, a challenge.”

MacKenzie wrote years before, “Lahinch will make the finest and most popular golf course that I, or I believe anyone else, ever constructed.”

With a little help.

Infatuated by links golf, Blaine Newnham has played the great courses of the British Isles, from St. Andrews and Royal Dornoch in Scotland, to Royal Porthcawl in Wales, to Lahinch and Ballybunion in Ireland. He was a sports editor and columnist for 11 years with Oregon’s Eugene Register-Guard, and an associate editor and sports columnist for The Seattle Times for 23 years.

In 2014 he authored the book America’s St. Andrews, chronicling the birth of Chambers Bay and its lead-up to the 2015 U.S. Open. Blaine has received the Distinguished Service Award from the Northwest Golf Media Association, and is a regular member of the Golf Writers Association of America.