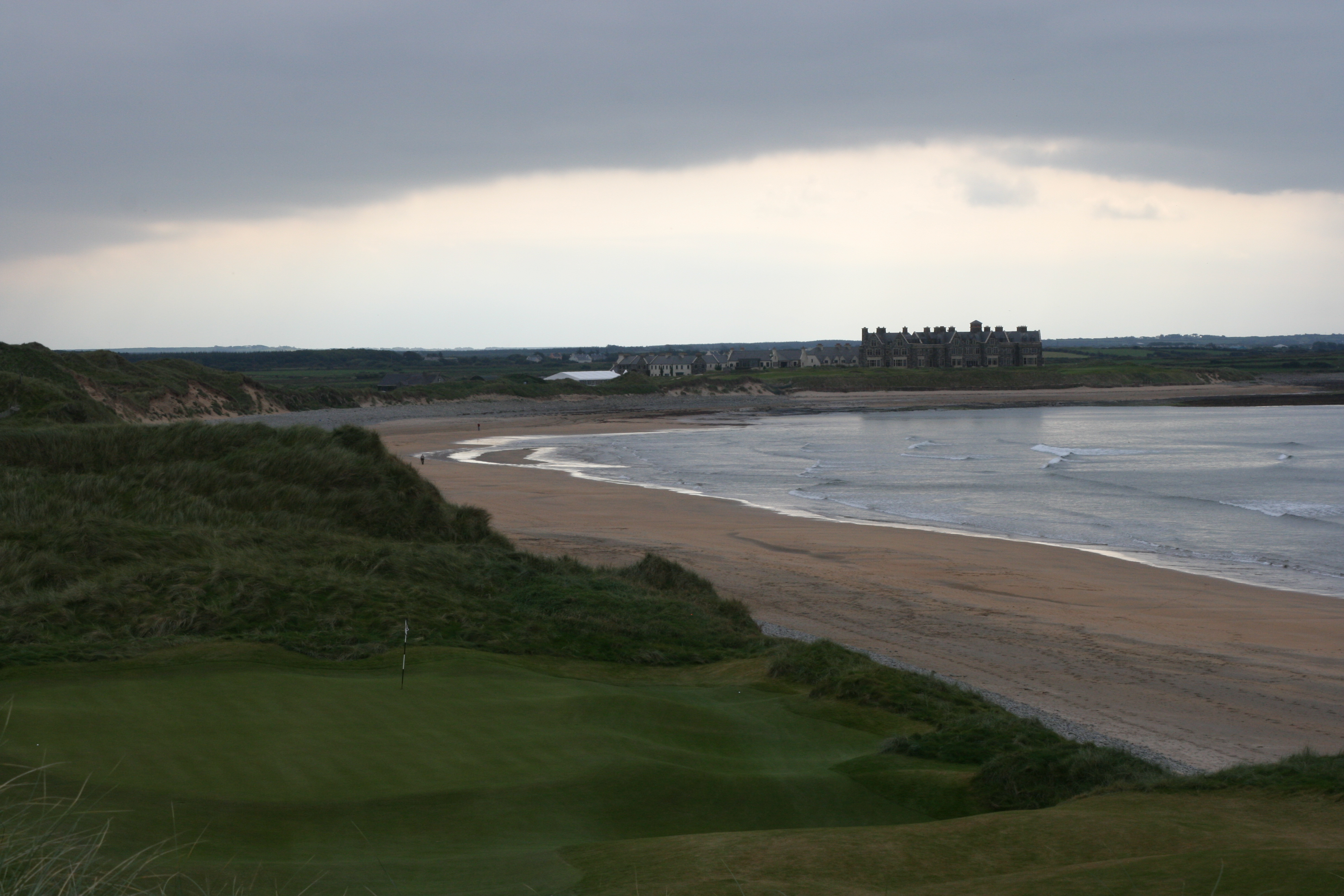 DOONBEG, CO. CLARE, Ireland — In December 2013 and early in 2014, when billionaire Donald Trump was negotiating the purchase of Doonbeg Golf Club, on the shore of Doughmore Bay, two massive storms off the Atlantic Ocean essentially reduced the golf course from 18 holes to 15.

The storm battered southwest Ireland, and in so doing it took away the side of the 18th fairway, wrecked part of No. 9, and destroyed No. 14, a par 3 that had been a signature hole, cited in Tom Coyne’s book, “A Course Called Ireland” as “perhaps the most beautiful 100-yard hole I’d ever played, the green stuck into the side of the beach head like a saucer of grass hanging over the ocean.” 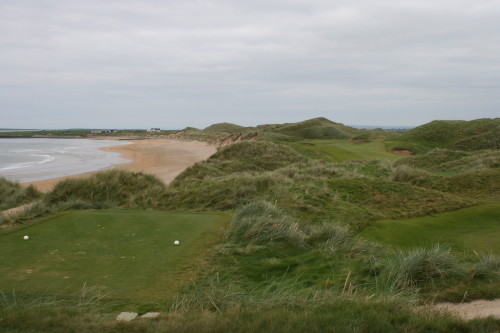 The waves undercut the sand beneath the hole, flattening it “like a pancake,” said John Galvin, a guest services representative who has worked at the course since it opened in 2002. “That was very disheartening,” he said, noting that workers who had helped build and nurture the course were distraught, “men were literally in tears.”

Well, at what is now Trump International Golf Links Doonbeg, the 14th has been rebuilt, and it’s still beautiful, though not quite as close to the ocean as before. Trump has retained golf course architect Martin Hawtree, whose credits include the redesign of nearby Lahinch Golf Links, to refurbish the greens, changing the surface to fescue, adding undulation, moving some slightly (and removing a bunker in the middle of the No. 12 green installed by the original designer of the course, golfing great Greg Norman).

Galvin said the changes have made the greens “more interesting” but also “more fairer.” 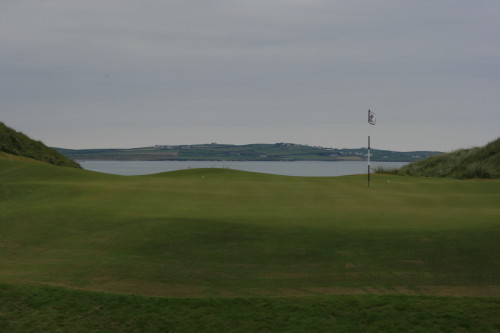 So far, the fourth through 12th greens have been redone, and the first three are next on the list, with 15, 16 and 17 also on the schedule, as the course will close except for limited play in mid-November and reopen in March. (Similar work is going on at Ballybunion, which will install fescue in all 18 greens over the winter.)

Galvin believes that the course will remain true to Norman’s routing, which was determined in part by environmental concerns, to protect an endangered snail. The original investors had purchased property for the golf course from area farmers, and in a way Doonbeg is a classic links course, in that the wind and the ocean have created the dunes, which separate the sea from the arable land.

Give credit to Norman, who recognized the opportunity presented by the dunes. 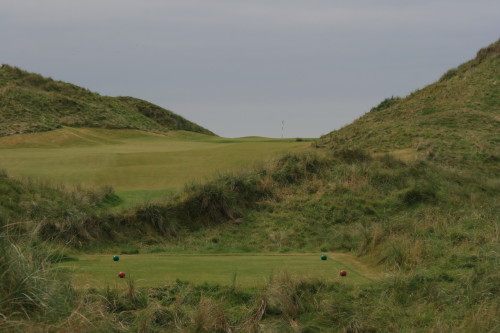 The fifth hole at Trump International Doonbeg requires a shot through a narrow valley between the dunes.

“Like the original links courses, Doonbeg was built with shovels rather than bulldozers,” wrote the authors of “True Links” a definitive book about links golf. “Holes were not so much created as allowed to appear, with only a few fairways and greens shaped and contoured. Blowout bunkers were left as they were found and those added were dug by hand, their faces revetted with sod and their collars fringed with shaggy grass. The result is a raw and spectacularly natural golf course, minimalism at its ultimate.”

In that vein, the course presents a study in contrasts — the massive, stone hotel, built by the previous owners, resembles a medieval castle, and beyond the resort and the golf course, as far as you can see, is flat, simple farmland.

Trump’s been to the course three times that Galvin knows, including this year, before launching his bid for the U.S. presidency, and if there are golfers who have stayed away for political reasons, well, that’s not clear. (Though Trump seems to have made a wise move, locally at least, by migrating the name from Trump International Ireland to Trump International Doonbeg, and moving back to an old-style logo rather than his personal crest.) With cottages and the hotel on site, and plans for an events center, the golf course draws non-golfers as well as golfers, about 70 percent of whom are Americans, Galvin said. 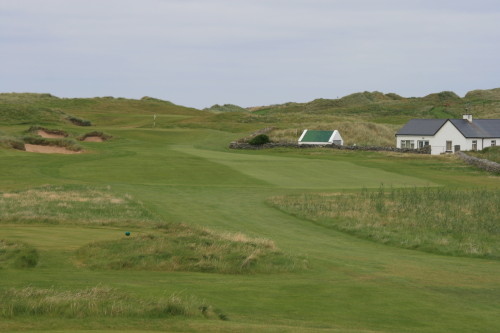 A farmhouse remains near the third green at Trump International Doonbeg.

Thanks to the courtesy of Tourism Ireland, represented by Bernard McMullan, I played Trump International Golf Links Doonbeg on Monday with three Northwest journalists from the Seattle area — Blaine Newnham, the former sports editor and columnist of the Eugene Register-Guard and the longtime columnist for the Seattle Times and author of  “America’s St. Andrews” about U.S. Open site Chambers Bay; Tom Cade, senior director of communications for the Pacific Northwest Golf Association and editor of Pacific Northwest Golfer Magazine, who plays to a 2 handicap, and Rob Perry, of Bellevue, Wash., a professional photographer of all things golf, who plays to a 3.6.

Though there were a few blind shots, and imposing forced carries — and though the golf course had sold out of course guides, making it difficult to figure out some of the routing at times — we thought it was a very fair and very playable and enjoyable course. It was a gray day, but warm, with little wind, and no rain. For me, it lacked the stunning vistas of Old Head (so what course doesn’t?) and Tralee, or the charm and beauty of Waterville and Lahinch; maybe a course for a golfer to play first, as a build-up to the others.

Along those lines, add Ballybunion and that’s six amazing golf courses, all within a few hours drive. “It’s the circuit for a lot of golfers,” Galvin said. 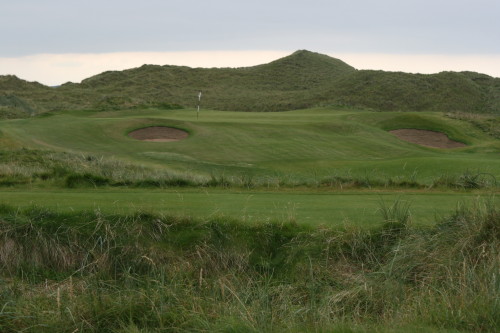 There are six sets of tees at par 72 Doonbeg; playing from the second set, the black tees, which play 6,431 yards to a rating of 71.0 and a slope of 129, Cade was our medalist Monday with a 78; Perry shot 80. Playing from the white tees, (5,840 yards, rating of 69.0, slope of 118), I shot a could-have-been better 97, with a birdie on the par four No. 15 hole, and survived a determined back-nine charge by Newnham to win the Guinness in the daily match-play match of former Register-Guard sports editors for just the second time in six matches.

Lost balls? Easy to count. The memories of this trip? Countless.

(Postscript: In the October issue of Golf Magazine, Donald Trump, in an interview by Joe Passov, expounded upon Doonbeg: “We blew it up. I blew up 65 percent of it last year. I bought 500 acres of the best piece of land in Europe. I also have a hotel that is considered one of the best in the world. They (the original developers) spent $350 million. They spent a tremendous amount of money building this project, and then the Irish economy crashed about as bad as any economy did. I went in during a brief moment with literally an hour to close, and I gave them a check and bought the whole thing. And everybody wanted it because Doonbeg is special.

“I then retained Martin Hawtree to look at the course because the land was so good, and in fairness to Greg Norman, they were not able to get the permits, so they couldn’t use some of the best land. They had a problem with (environmentally protected) snails, and a tidal problem, and they were unable to get various approvals, so they had to leave some of the best land unused.

“I hired Martin Hawtree and said to the Irish government, ‘Do you want a truly great course? Or can we make do with what we have?’ It’s successful either way, but they said ‘We want it to be great.’ I said, ‘Then we have to solve the snal problem and the other problems and get this thing moving.’ I soon had every permit I wanted. The other 35 percent gets blown up October 1. The course will be brand-new for next season, 100 percent rebuilt, and it’s incredible.”) 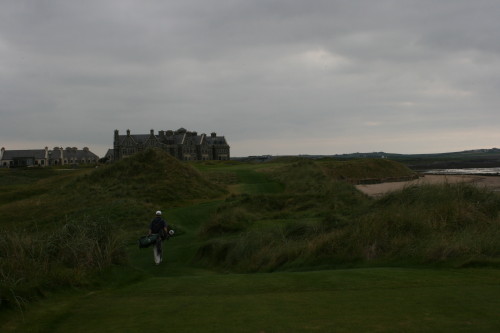