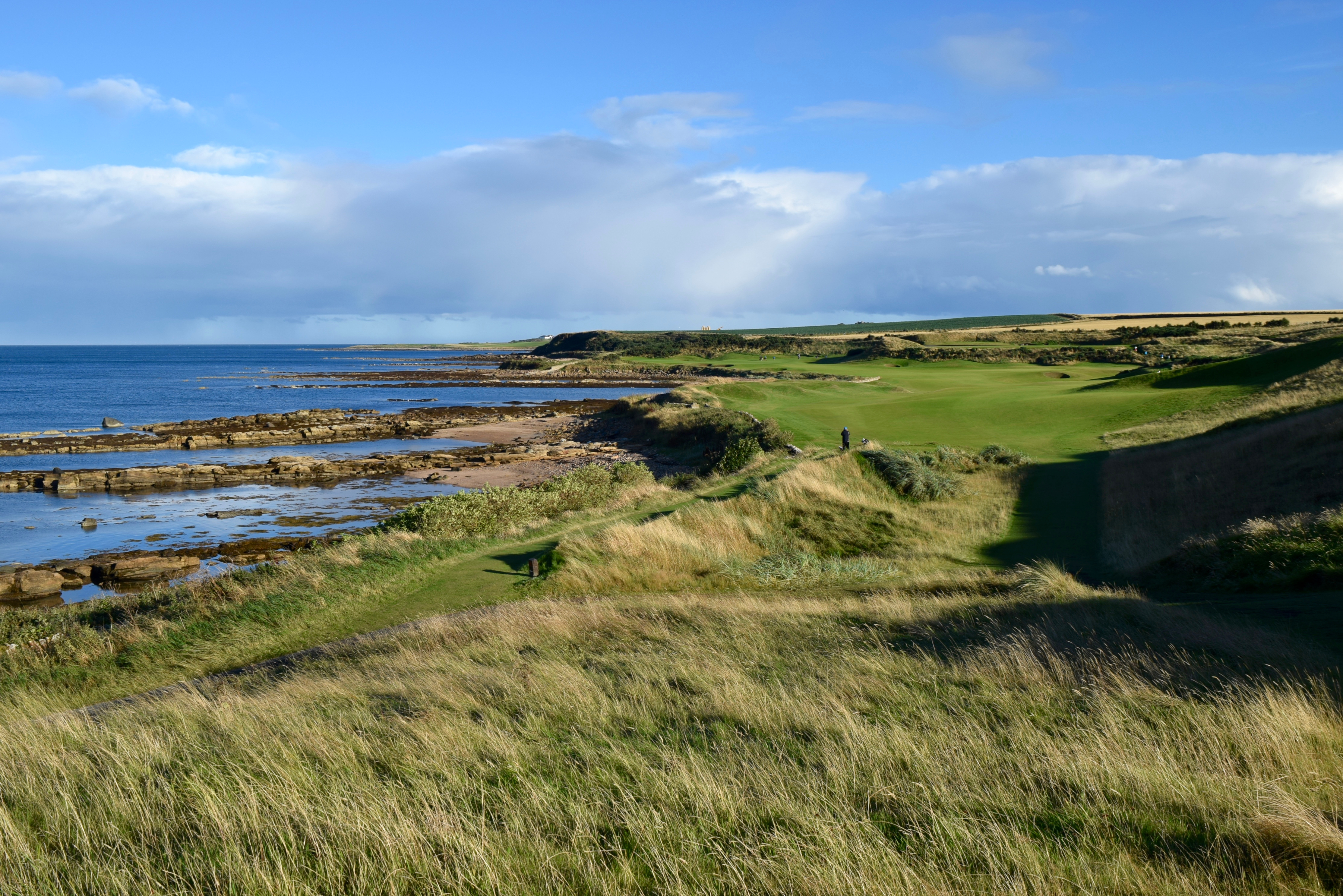 KINGSBARNS, FIFE, Scotland — It rained some Thursday morning on the east coast of Scotland, and we drove from the Old Manor Hotel on Leven Road, overlooking Lundin Golf Links, about 15 minutes north into St. Andrews, and by then it was raining quite hard.

We parked very near the building where Old Tom Morris died, of injuries in a fall down some stairs, and walked around a block and a short distance, and there it was, in the middle of town, the most iconic course in golf, the Old Course at St. Andrews.

We could see the No. 17 Road Hole, and the 18th and first fairways, and the Royal & Ancient Golf Club, and beyond that the stretch of sand along St. Andrews Bay where the famous running scene in “Chariots of Fire” was filmed.

People were everywhere, watching golfers putting on No. 18 or teeing off on No. 1, having photos taken on the bridge over the Swilcan Burn, walking across the course to the beach, going in and out of shops selling Old Course merchandise. It was a scene in which much was going on, and all centered on the golf course.

We had lunch in the pub in the Dunvegan Hotel, with its historic golf photos, and later toured the British Golf Museum, where you can see so much, including the first 13 rules of golf and old wooden clubs, long and heavy, and hand-made featherie golf balls, replaced in the mid-1800s by gutta percha golf balls, made from sap from a tree in Southeast Asia, easier to make and more durable, which would enable more people to play golf and affect the way clubs were made, and yeah, I’m someone who reads all the stuff in museums.

It was a wonderful immersion in long-ago golf.

And then we drove maybe seven miles southeast of St. Andrews, to became immersed in a spectacular golf course, Kingsbarns Golf Links, that is from not long ago at all.

True, as early as the 18th century golf was played on part of this land, and in the 1900s there was a nine-hole course along the shoreline of the North Sea, but that got converted to a minefield during World War II.

Kingsbarns, located on a 1.8-mile stretch of North Sea coastline, opened in 2000, the creation of developer Mark Parsinen and golf architect Kyle Phillips. And create they did, converting farmland into a modern links course — one that for an Oregonian conjures glimpses of Bandon Dunes, Pacific Dunes and even Bandon Trails — that is ranked No. 65 in the world by Golf Magazine and No. 69 by Golf Digest.

“What they accomplished here is pure magic. They took 190 acres of what had been pasture and crop lands (wheat, beets, corn) along the sea and created, out of whole cloth, a magnificent and sublimely natural-looking links course. This was legerdemain on the grandest scale, with dunes of various shapes and sizes, crumpled fairways, a plethora of humps, hillocks and hollows, cunning little rough-cloaked mesas and promontories, and spirited greens that are a clear by-product of the immediately surrounding terrain.

“But this links is entirely manufactured. Nature had essentially no hand in it, except to provide the entrancing seaside setting with the surf surging against the rocky foreshore. Yet even the most experienced observer would swear that it is authentic, its contours surely the result of the receding seas and the persistent winds over tens of thousands of years. Not so. It was excavators, dumpers, bulldozers and backhoes.”

What’s truly remarkable about Kingsbarns is that the sloping nature of the land has produced a course in which holes generally parallel the North Sea, rising from holes that are virtually right on the beach or rocks — No. 3, No. 15 and the much-photographed par 5 No. 12 — in two or even three tiers, so that the sea is always in sight.

From behind the No. 11 green, for example, you look down on the greens of two par 3s,  No. 8 and the amazing No. 15. And talk here is that after the Women’s British Open is held here next year, a couple other tee boxes (on No. 3 and No. 17) may be moved closer to the beach as well.

Closed during the winter months, Kingsbarns does 240 to 250 rounds per day on the longest days of summer, at greens fees of 234 British pounds, or about $300, which happens to be essentially the same cost of playing Royal Troon Golf Club on the west coast of Scotland, a course far more historic, an Open Championship site, but nowhere near as stunning. If you had to chose one …. ?

Well, suffice to say, were I given that choice, Kingsbarns is compelling.

At the invitation and intercession of David Connor of VisitScotland, I played Kingsbarns on Thursday with three Northwest colleagues in golf journalism:

As we putted before our tee time, the rain was falling. And then it stopped, and the sun came out, and what followed was one of the Best Days Ever golf experiences.

Make no mistake, it’s not an easy course, with plentiful bunkers, sloping fairways and huge, huge greens with contours, and all the capricious bounces and rolls that come with links golf, and on an often windy day. The course plays 7,227 yards from the tips and 6,807 from the white tees, which the scorecard suggests only for 5-and-under handicappers, but Cade, a 1.4, played the par 72 course from the green tees at 6,351 yards, with a USGA course rating of 71.1 and a slope of 132, found that to be plenty and shot 83. (Perry played nine, then took advantage of the sunlight to shoot photos.)

Newnham and I played our own combination of blue (6,086) and red (5,238) tees, somewhere in the vicinity of 5,500 yards, and that was more than enough; Blaine had his best round of the trip, with an 88 that included six pars, easily winning the daily match of former Register-Guard sports editors to take a two-round Scotland lead with only three (alas) rounds left.

My 98 included a few too many bad swings and mis-read putts, and three balls lost, bringing the seven-round Scotland total to 12 lost against five found.

But it was one of those rounds that, when it was over, I didn’t want it to be, wanted the fading daylight to linger and the chance to play just a few more holes overlooking the sea.