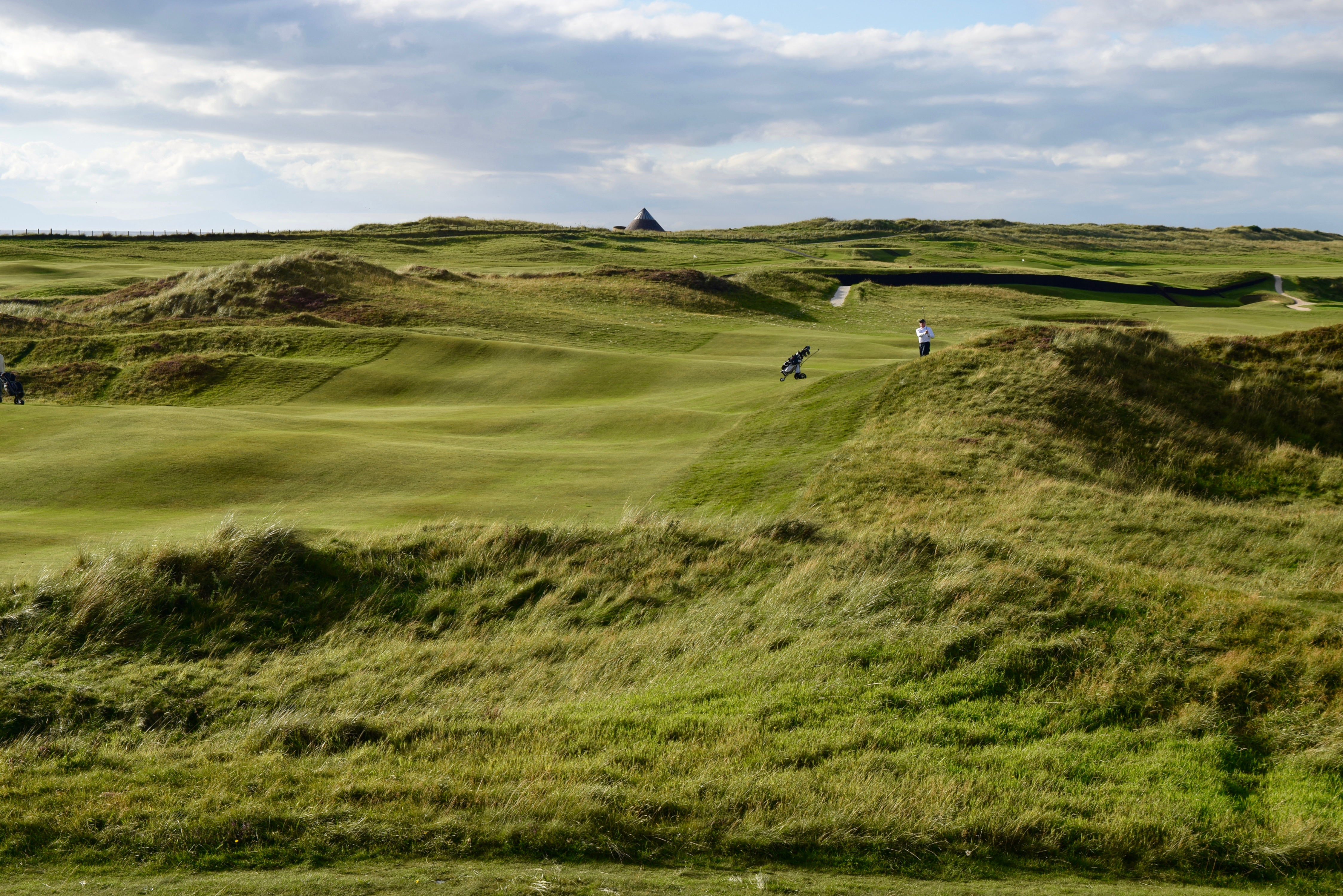 The historic venues of Prestwick, Trump Turnberry and Royal Troon

PRESTWICK, AYRSHIRE, Scotland — On the Firth of Clyde on the western Scotland mainland, in the region called Ayrshire, separated by a mere 25 miles, are three golf courses that are linked, intrinsically and historically, to the United Kingdom’s most important golf tournament, the Open Championship, or as we know it in the United States, the British Open.

Prestwick Golf Club, established in 1851, held the first Open Championship in 1860 and hosted the event 23 more times, through 1925, when it was simply deemed too small to accommodate the crowds.

The Ailsa Course at Turnberry, which dates to 1906, has hosted four Open Championships, the last in 2009, and has been dramatically renovated and rebranded Trump Turnberry by its new owner, Donald Trump, with the clear goal of hosting the Open Championship again.

And Royal Troon Golf Club, which dates to 1878, has hosted nine Open Championships, most recently this past summer, when Henrik Stenson and Phil Mickelson engaged in an historical final round in a place where you’d think there’s no room for any more history.

But, in Scotland, it seems, there always is, and in Scotland, particularly, the Open strikes a very deep chord.

“The Open to us doesn’t trump the U.S. Open or Masters but stands for something greater than the now,” said Ru Macdonald, an award-winning expert on Scottish golf travel. “It’s our way of feeling a part of the unrivaled history of our game for decades to come.

“Open crowds are often labeled as the most knowledgeable in golf, perhaps because it’s mainly golfers in attendance … (with) a chance once again to witness the best golfers mastering the game we gave to the world.

“To us Scots, it’s a celebration of all that’s great about our game — tradition, history and accessibility. We very much feel part of the tradition and theater, lining the fairway and greens with fellow golfers.”

At the invitation of VisitScotland, the nation’s marketing wing, I played these and other courses last month with three other members of the Pacific Northwest golf media: Blaine Newnham, the former sports editor and columnist of The Register-Guard and the retired longtime columnist for the Seattle Times; Tom Cade, senior director of communications for the Pacific Northwest Golf Association and editor of Pacific Northwest Golfer magazine; and Rob Perry of Bellevue, Wash., a professional golf photographer.

In Ayrshire, southwest of Glasgow and less than two hours drive from Edinburgh, there are more than 20 courses. So there are choices here, but if you wish to follow the footsteps of Old Tom Morris or Young Tom Morris or Harry Vardon, James Braid, Bobby Locke, Arnold Palmer, Tom Watson and, finally, Stenson and Mickelson, then consider Prestwick, Turnberry and Royal Troon.

They are major championship courses that you can play, for a price. Weekday green fees are just under $220 at Prestwick, about $250 at Trump Turnberry and $290 at Royal Troon, which is open to visitor play three days a week, and by contrast some of the most historic venues in the United States, such as Augusta National, never are.

The professional at a nearby course described Prestwick as “seriously quirky.” The city has grown up around the course, which sits between the railroad tracks and the firth, and the course can be tough to navigate for first-timers without a caddie.

The first hole, called Railway, is among the most famous in golf, with a stone wall hard down the right side to separate golf course from railroad tracks, but there’s not much safe harbor left, either, on this par 4, just gnarly rough, so golfers tee off with long irons or hybrids. Quirky, yes.

Prestwick has given golf some of the most famous, and most-copied, holes in golf course architecture.

The third hole features the Cardinal Bunker, huge, deep, crossing the entire fairway, the sides fortified by black wooden planks. The fifth, called Himalayas, is another legendary hole, a par 3 with a blind tee shot over a 25-foot sand hill. The 17th, considered the most famous hole at Prestwick, is a par 4 called The Alps, with a blind second shot over a dune to a hidden green, and between the dune and the green is an enormous bunker called Sahara, bigger than the green itself.

“You’re playing a championship golf course here,” said caddie master Andrew Erskine, who has worked at Prestwick for 28 years. “This is a difficult golf course. … The rough and the wind are its defense.”

Wrote the late, great golf writer James W. Finegan: “You have not played golf in Scotland unless you have played this great and inimitable course.”

Put politics aside, if you can. Trump has taken an already revered golf course, the Ailsa course at Turnberry, site of the famous “Duel in the Sun” in which Tom Watson bested Jack Nicklaus in the 1977 Open, and, through his trust in golf architect Martin Ebert, taken it to new heights, reinvigorating the course in such an artistic, inspired way that it seems well-deserving of being returned to the Open Championship rotation, which is his dream — and perhaps an elevation in the world rankings close to the top 10.

Trump purchased the historic hotel, spa and three golf courses at Turnberry resort in 2014; the Ailsa course was closed last fall and reopened in June. It has always had compelling attributes — the views of Ailsa Craig, the rock island in the Firth of Clyde; the historic Turnberry Lighthouse; the ruins of the 13th century castle of Robert the Bruce.

Among a multitude of changes — nine new greens were built — what the Trump/Ebert team did was take greater advantage of the proximity to the water, with eight holes now running along the firth.

The par 3 No. 9 hole involves a carry over the sea, with the lighthouse visible on the left; it was converted from a par 4. The revamped par-5 No. 10 hole also commands views of the firth, and the par-3 No. 11 is a completely new hole, involving a shot over rocks and inlets.

In our group, Cade had played the course before the makeover and deemed it a stunning improvement. Writing for Golf Digest, Geoff Shackelford said the new 9-10-11 stretch is “comparable to the best trifectas in golf: Pebble Beach (7th-8th-9th), Cypress Point (15-16-17) or Augusta National (11-12-13).”

There is a distinguished, Old World formality to Royal Troon — members wearing jacket-and-tie to and from the course, the impeccably-appointed locker room, the excellent display of club history, the members-only Smoking Room, though no one is allowed to smoke there anymore. The course is so close to Prestwick, just a 10-minute walk behind the ninth hole at Troon, that members of the two clubs play a tournament in which they play nine at their course, walk next door to play nine at the other, have lunch and then reverse the process.

The essence of the golf course that is Royal Troon today was laid out by Willie Fernie, head professional, in 1909. The two most noted holes, the short par-3 No. 8 hole known as Postage Stamp, and the par-4 No. 11 hole, called The Railway, along the tracks, date to that era. (Two bunkers, including the narrow Coffin Bunker, were added to Postage Stamp in 1923.)

As Royal Troon golf historian Douglas McCreath told the New York Times: “It’s quite amazing that these two holes from 1909 still feature as iconic holes in the year 2016.”

Finegan wrote that Royal Troon is “too frequently dull,” not thrilled by the first six holes, or the last, but that doesn’t mean it’s not challenging. And the middle holes, including Postage Stamp and The Railway, are truly memorable, in a country the specializes in golfing memories.

Our accommodations for 11 nights in Scotland, courtesy of VisitScotland; all hotels included breakfast:

Ugadale Hotel & Cottages, Machrihanish, Argyll: Refurbished hotel across the narrow road from The Machrihanish Golf Club and owned by the company that built Machrihanish Dunes. Rates from $225. For full immersion in Machrihanish, a special place. www.machrihanishdunes.com

The Gailes Hotel, Irvine, Ayrshire: Within minutes of Glasgow Gailes, Western Gailes and Dundonald. Rates from about $160. The resort has a practice range, golf shop and nine-hole course. A good home base for Ayrshire. www.gailesresort.com

Motel One, Edinburgh: Ultra modern hotel in an old building a short walk from the Royal Mile and Edinburgh Castle. Rates from $90.