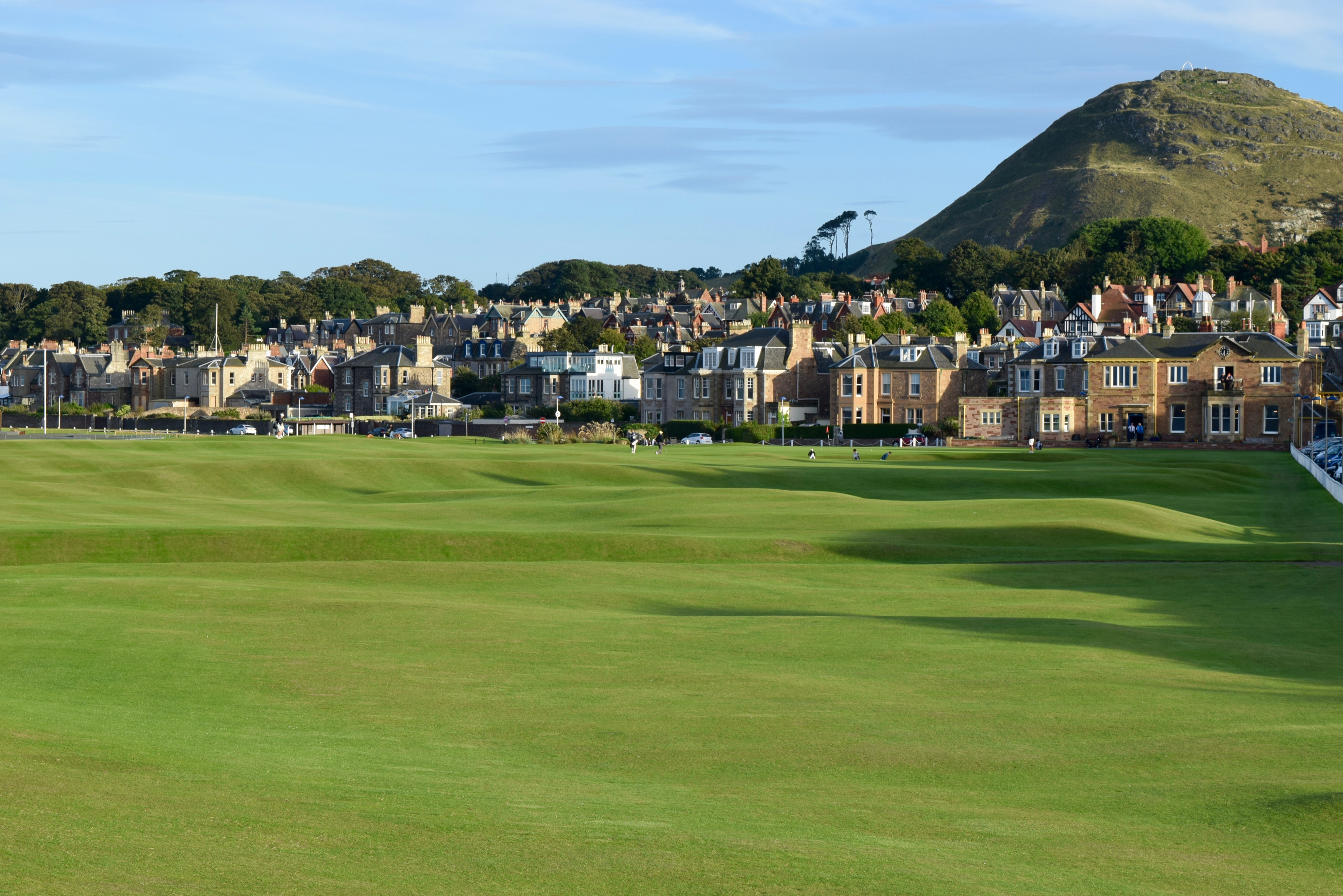 In a place with courses that are spectacular, historic and fun, North Berwick GC is special

EDINBURGH, Scotland — The flights have been long, but now you are here. You collect your golf clubs, find the rental van, remember that in the United Kingdom they drive on the left side of the road and plug a destination into the GPS.

Which will give you specific instructions, something like “in six miles, enter the roundabout and take the third exit,” but those are mere details.

Welcome to Scotland, where all roads lead to golf.

From Edinburgh, with its bluff-top castle that dates to the 12th century, you can travel to the north side of the Firth of Forth, the wide estuary of the River Forth that flows into the North Sea, and in 90 minutes be in St. Andrews, home of The Old Course, the recognized birthplace of golf, in the historic Kingdom of Fife, where there are about 50 golf courses.

Or, you can stay on the south side of the firth, in the region called East Lothian, where 45 minutes from Edinburgh you can play the wonderful West Links at North Berwick Golf Club, dating to 1832, the third-oldest club in the world where golf has been played over the original links.

You needn’t go any farther than that for golf that is historic, beautiful, challenging and simply charming.

But then it takes less than two hours to drive past Glasgow to Ayrshire on the west coast of Scotland, home of such courses as Royal Troon, Prestwick and Trump Turnberry. And from there you can find your way across the Firth of Clyde by ferry, or drive that long and winding road about which Paul McCartney sang, up around the firth and down the peninsula to the tip of the Mull of Kintyre, to Machrihanish.

For golfers from the United States, this is the stuff of pilgrimages, to play courses that have hosted the Open Championship — the British Open — or that were laid out by Old Tom Morris in the late 1800s.

But in Scotland, with its roughly 550 courses, golf is simply part of the culture, and belonging to a golf club is not necessarily a sign of wealth, but a matter of community. This nation of about 5.3 million people, covering an area roughly the size of South Carolina, is the Home of Golf.

The sport has been played here since the 15th century, when it was called “gowf.” The oldest golf club in the world, the Honourable Company of Edinburgh Golfers, now based at Muirfield Golf Club, was founded in 1744.

In Scotland, there’s a golf course for every 9,800 persons.

“Everybody plays golf,” said Hamish Galloway, 68, handicap secretary for The Golf Club House, Elie Links, where the starter uses an old submarine periscope to determine whether the first fairway, which goes up and over a hill, is clear for golfers on the first tee, and where the golf club prides itself on getting young people started in the game.

“It’s part of the ethos and the culture of the society. Because golf teaches you. It’s a little cameo of life. It teaches you all about everything. That you never give up and you never know what’s going to happen, and you just hang in there, and suddenly you hole a long one and the other guy three-putts.

At the invitation of VisitScotland, the nation’s marketing wing, I played 10 golf courses in Scotland earlier this month with three other members of the Pacific Northwest golf media.

Joining me were Blaine Newnham, the former sports editor and columnist of The Register-Guard and the retired longtime columnist for the Seattle Times; Tom Cade, senior director of communications for the Pacific Northwest Golf Association and editor of Pacific Northwest Golfer magazine; and Rob Perry of Bellevue, Wash., a professional golf photographer.

Regular weekday greens fees for the courses we played ranged from $85 at Machrihanish Golf Club to $300 at Kingsbarns Golf Links. Today’s story will focus on the four courses nearest Edinburgh on the eastern side of Scotland: North Berwick, and three courses in Fife, north of Edinburgh — Kingsbarns, The Golf House Club and Balcomie Links.

(On Oct. 11, Golf Extra will focus on western Scotland, courses in Ayrshire — Prestwick, Trump Turnberry, Royal Troon and Western Gailes — and in Machrihanish at the tip of the Kintyre Peninsula.)

I start with North Berwick Golf Club, West Links, ranked No. 63 in the world by Golf Magazine, because it was in many ways my favorite course (and a tremendous value at $140), though Machrihanish Golf Club is also in that conversation, and Trump Turnberry and Kingsbarns are both amazing, and all the aforementioned are also ranked among the top 100 courses in the world.

For me, North Berwick had everything. I loved that it is historic, dating to 1832. I loved that it’s true links golf, where wind and weather are part of the challenge, with wonderful views of the Firth of Forth and local islands, and a burn (stream) to contend with. I loved that like so many of the older courses it starts and ends in the town.

I loved that this is a place that has contributed to the lore of golf architecture; its par 3 No. 15 hole, called Redan, is considered one of the most copied golf holes in the world, wherein the golfer hits to a sloping green he can’t see, over a bunkered dune, and between the dune and the green there’s a bunker and a swale.

I loved that it’s suitably quirky. The original course was six holes, three out to a stone wall, and three back. The wall is still there, and there’s a stone wall, too, that runs alongside the No. 13 green, separating it from the fairway, and, no, they don’t design courses like that anymore.

“The thing about the course is that it hasn’t really been designed as such,” said Derek Ferguson, 60, a retired lawyer who greeted visitors to the club, showing us around the clubhouse that was built in 1880, pointing out the original wooden lockers, in the room where a club member who became Prime Minister of the United Kingdom in the early 1900s, Arthur Balfour, once held a cabinet meeting.

“It’s kind of evolved, I suppose is the way to put it.”

David Strath, who became greenkeeper in 1876, extended the course from nine to 18 holes and created No. 15 and other memorable holes. I loved the time-stands-still quality of North Berwick. The head professional, Martyn Huish, 47, has been in that job for seven years and served as an assistant for 18 years before that, working for his father, David Huish, who was head professional for 42 years. In his lifetime, Martyn Huish said, some tees have been added, to cope with modern technology, but the greens haven’t moved.

And he’s had chances to move, “but why be anywhere else?

The Kingdom of Fife

In Fife, we didn’t play The Old Course, though on a rainy morning we were among tourists in the middle of St. Andrews watching golfers finish on No. 18, and teeing off at No. 1, and seeing folks pose for pictures on the bridge over the Swilcan Burn. Playing The Old Course involves advance booking and a lottery, and high-season requests for 2017 are no longer being taken. However, single golfers can show up early on the day of golf and take their chances; high-season greens fees are just under $230.

Just seven miles south of St. Andrews, Kingsbarns Golf Links opened in 2000, the design of a Californian, Kyle Phillips; it’s not a traditional links course, but instead a course wholly created, much in the manner of Washington’s Chambers Bay, in this case out of farmland. But it is certainly a triumph, the tiered nature of the course offering ever-present views of the North Sea, reminiscent of the best parts of Bandon Dunes, and it is ranked No. 65 in the world by Golf Magazine.

Wrote the late James W. Finegan, an expert on golf in Scotland:

“What they accomplished here is pure magic. They took 190 acres of what had been pasture and crop lands along the sea and created, out of whole cloth, a magnificent and sublimely natural-looking links course.”

The other two courses we played in Fife were touched by Old Tom Morris — the longtime keeper of the greens at St. Andrews (and also Prestwick), and a four-time champion golfer in Britain — in the 1890s, but existed in some form before that. They are enduring, endearing courses that are great fun.

The Golf House Club, Elie Links, is so named because several clubs used the same course, on the Firth of Forth, but this was the club that built the clubhouse, in 1875. Regular greens fees are $100.

“I’ve got a letter from one of these American groups,” said Galloway, the handicap chairman at Elie Links. “They came and they did Scotland. They wanted to do Carnoustie and Muirfield and The Old Course and all the big tracks. And on the last day, they had nothing planned, and so they came here.

“And they wrote me — I still get choked up when I think about it — a letter that said ‘Muirfield was magnificent, and the majesty of this (course) and that, but we had a vote on our best day, and our best day was here.’

“It’s a different kind of golf because you’ve always got a chance. You don’t have to be a long hitter to score well. And yet nobody murders it.”

Nearby, the Crail Golfing Society dates to 1786, the seventh-oldest golf club in the world, and it has two courses: Craighead Links, designed by Gil Hanse (who designed the course for the Rio Olympics) as his first solo project in 1998, and Balcomie Links, laid out by Old Tom, the first nine in 1895 and the second nine four years later.

Balcomie features numerous holes right on the water, and every hole with a view. At $90 it’s a par-69 course that plays only 5,861 yards from the white tees, with three par 5s, and six par 3s, including a par 3 finishing hole, and if that seems odd, well, that’s not the only thing.

Tee boxes are often just a few paces from greens, and more than a few signs warn golfers not to hit while the green in front of them is occupied — a different green than the one they are about to play — or to wait until a tee box in the line of fire has been cleared.

“Very quirky, very unique,” assistant professional David Snodgrass said. The first five holes, wonderful, hug the forth, which is to the right, leading Snodgrass to offer this tip:

“You’ve got the whole of Scotland on your left-hand-side so don’t hit it right.”

Sage advice, and we’ve got more of Scotland ahead, in two weeks in Golf Extra.