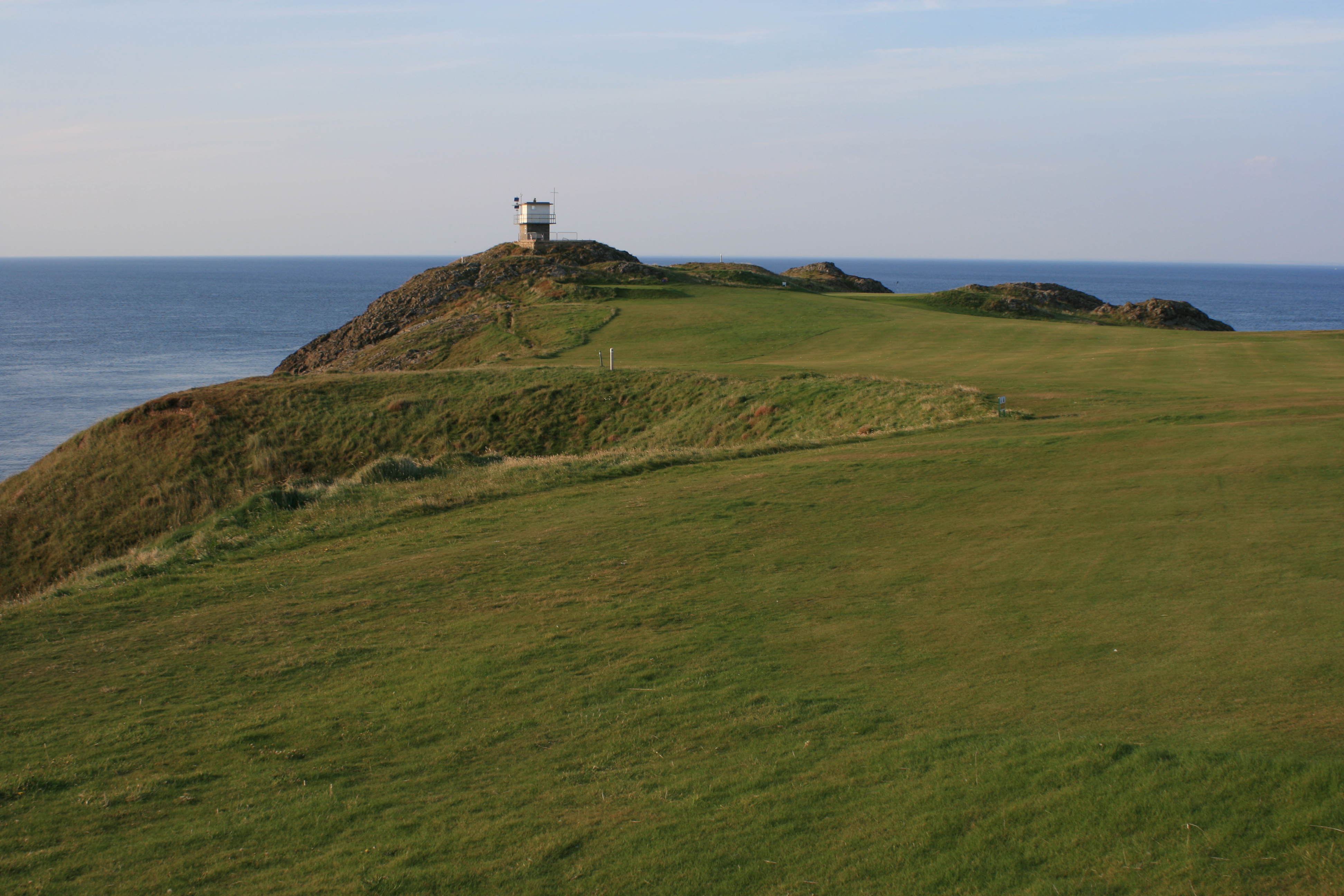 Oh, brother, quite the golf course in North Wales

From the village of Tudweiliog, Cian Williams is 14, brother Deio is 10. They both have great swings. 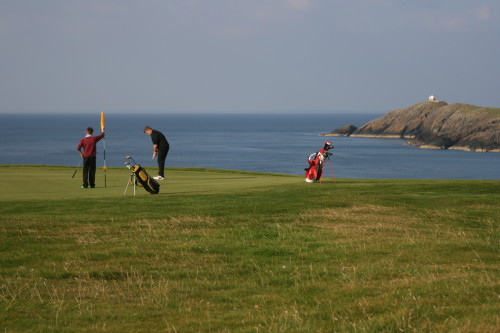 Nefyn is more than very nice. It’s one of the most spectacularly beautiful golf courses I’ve ever seen, overlooking the Irish Sea and Caernarfon Bay about 90 minutes drive from Conwy and Llandudno to the north.

Stand on the edge of the cliffs and look at the rocks and waves below, and you could be looking at the California Coast, from Half Moon Bay south to Carmel and Pebble Beach. 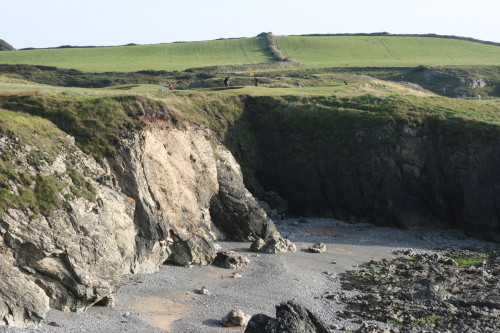 You see the water from every hole on the course, and there are eight holes on The Point, a peninsula that juts out into the sea, high enough and steep enough that you could hook your drive into the Irish Sea, or slice it into the bay.

On the sheltered side, boats bob in the water, and on the bottom of the cliff below the course are a few lodgings, including the Ty Coch (Red House) Pub in the National Trust village of Porthdinllaen. 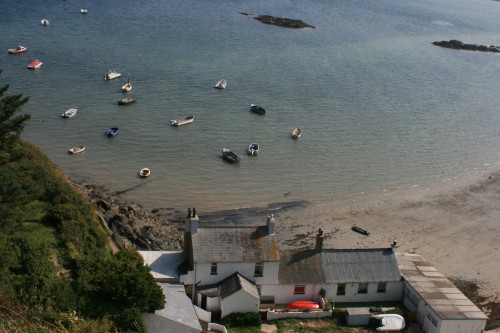 The view from the golf course at Nefyn & District Golf Club in North Wales.

Wrote prominent golf author James Finnegan, alluding to Old Head in Ireland and Pebble Beach in California, “when it comes to stupendous views and the sheer exhilaration of playing shots in a clifftop setting high above the sea, neither of them can put this remote Welsh course in the shade.” 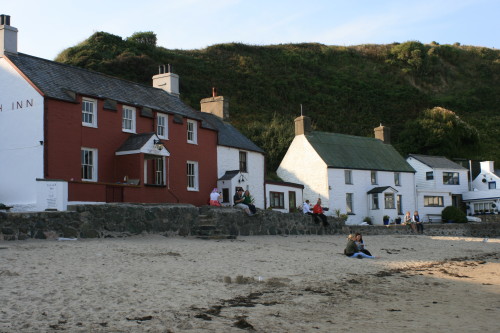 On the beach below The Point Holes at Nefyn & District Golf Club, the Ty Coch Inn, a pub that translates “The Red House,” gets great reviews and was the scene of a movie with Demi Moore, “Half Light,” a 2006 mystery-horror movie supposedly set in Scotland.

This is the kind of course that should draw golfers to North Wales, and it does, and in fact several foursomes of Americans played there Thursday, and some Englishmen drove up from south of London. Consider that the price — 44 pounds on weekdays, 52 pounds on weekends, or just under $70 and about $80 — is a tremendous value, considering the views.

Nefyn is a crown jewel of what’s billed as the Snowdonia Golf Coast — “Links Golf as it Should Be” — along with Porthmadog, Abersoch and Royal St David’s. It is located on the Irish Sea, and has “a view of the sea from every tee.”

But Nefyn is also a quirky golf course — actually, there are 27 holes, three sets of nine, with the holes on the Point, called the Old Course, that generally serves as a back nine unless a golfer chooses to play the “new” nine. Especially on the Old Course, there are  blind shots and strange, even dangerous, juxtapositions of tees and greens in a couple of places, and of recreational walkers and golfers. 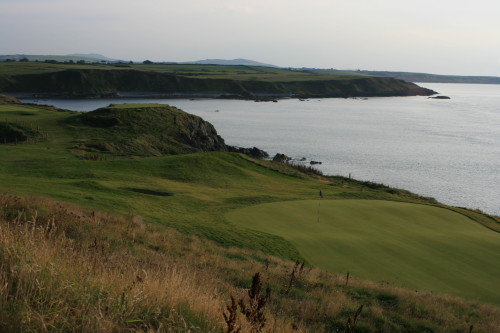 The 12th hole, third on the Old Course nine, is a 157-yard par three from an elevated tee (center left) at Nefyn & District Golf Club in North Wales.

Braid (1870-1950) is regarded as one of the greatest designers of all time, and he won The Open championship five times. He designed more than 300 courses through the British Isles, including 10 in Mid Wales and North Wales, which are now linked as part of the James Braid Trail , including Aberdovy, Porthmadog and Nefyn.

Nefyn suffered major storm damage in December 2013, with high winds and tides, resulting in salt damage to the holes on The Point, which were closed last year and only reopened last April, after a forced redesign of some holes. 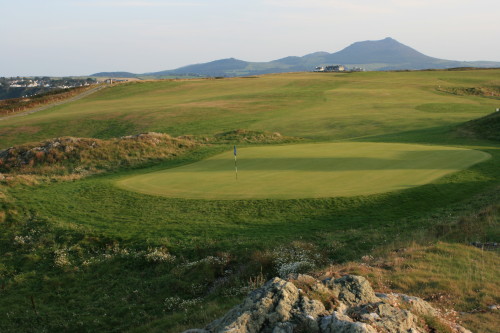 The 13th green at Nefyn & District Golf Club in North Wales, with the clubhouse in the center distance.

The views from the point do rival those of Old Head, but there are some quirks, too — a crowded opening hole, a short uphill par 4 closing hole off the Old Course.

The first hole of the Old Course, our 10th, features a short drive, and then a blind shot to an elevated tee, guided only by aiming posts. (For simplicity, I’ll refer to the Old Course holes by their back nine numbers, as they related to our routing Thursday.) The public path to Porthdinllaen and out to the end of The Point winds between between the 10th and 18th fairways, alongside the 15th and 17th, and on a sunny day Thursday, that meant a lot of people walking within range of golf shots. 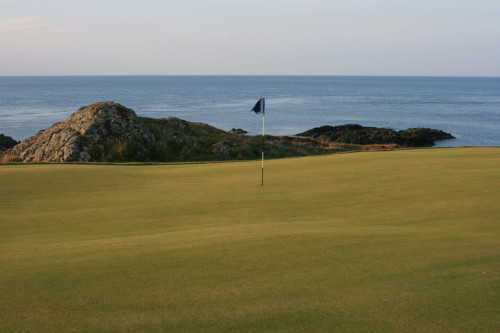 Golfers playing the iconic 13th hole, a 411-yard par 4 that was formerly the 12th hole, wind up running into golfers playing the 15th coming the other way. Golfers teeing off on the downhill par 3 14th hole, damn challenging in the wind, hit their drives over the 13th green; golfers teeing off on No. 15 must navigate the walking path on the left and the 14th green on the right.

Thursday, it all left you wondering whether The Point was a bit overcrowded. 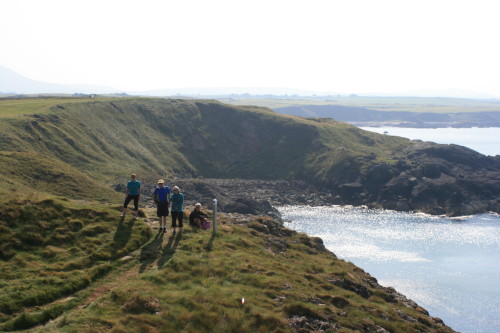 Which doesn’t mean that it wasn’t immense fun, because it certainly was, and there were good holes and views on both nines we played.

I played Nefyn & District Golf Club  thanks to the courtesy of Visit Wales, in the person of Jane Harris, with three Northwest journalists from the Seattle area — Blaine Newnham, the former sports editor and columnist of the Eugene Register-Guard and the longtime columnist for the Seattle Times and author of  “America’s St. Andrews” about U.S. Open site Chambers Bay; Tom Cade, senior director of communications for the Pacific Northwest Golf Association and editor of Pacific Northwest Golfer Magazine, who plays to a 2 handicap, and Rob Perry, of Bellevue, Wash., a professional golf photographer  who plays to a 3.6. 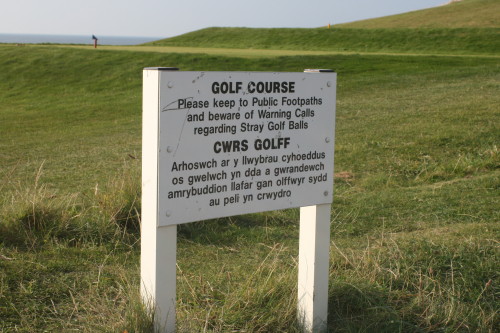 Public walking paths through Nefyn & District Golf Course come alongside and even between fairways.

On a warm, sunny day, it was certainly windy enough to get your attention. Cade was our medalist, with an 80 from the white tees; Newnham shot 86 from yellows, again winning the match of former Register-Guard sports columnists as  I shot 93 while losing seven golf balls — two to blind shots, where the ball was well struck but couldn’t be found, one to the wind, and three or four to an ongoing LOFT problem (lack of talent).

I  played the final hole, a short, uphill par 4, with the final ball in my bag, and birdied it, my second birdie of the round. 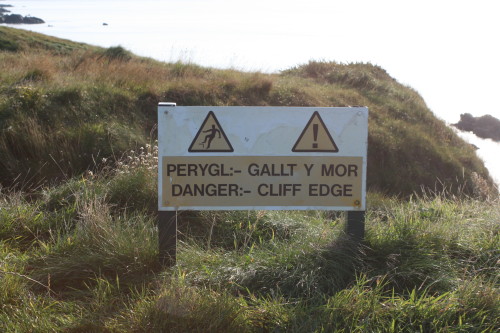