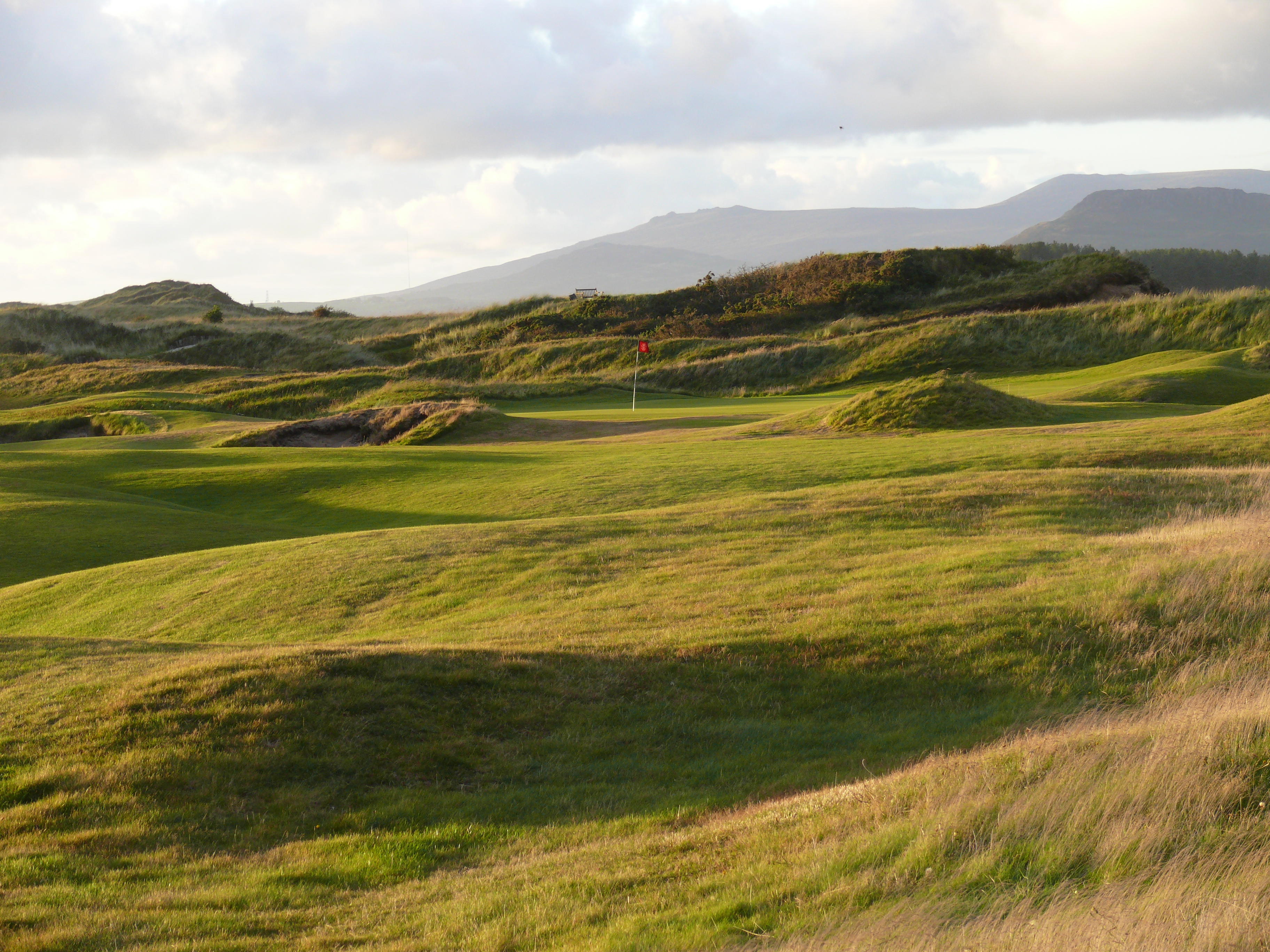 HARLECH, Wales — At Royal St. David’s Golf Club, you look to the cliff above and see Harlech Castle, built by King Edward I beginning in 1283 and now considered a World Heritage Site, with places like the Taj Mahal and the leaning Tower of Pisa.

When the fortress was completed, the waves of the Irish Sea crashed on the rocks below.

Over the centuries, the sea receded, and huge sand dunes were formed, and in 1894, on the flat land between the cliff and the dunes, a golf course was created, a course inspired by St. Andrews in Scotland, and a course that drew royalty and hosted championships.

When you play Royal St. David’s, said to be the toughest par 69 anywhere, you never see the sea, unless you climb an observation platform on the 16th tee, but you hear the waves on every hole, the same way King Edward VII must have heard them, when he granted his patronage in 1908, and the same way the Prince of Wales must have heard them, when he captained the club in 1934, before becoming King Edward VIII.

From Royal St. David’s you can take your golf clubs on the train — the tracks run between the course parking lot and the course itself, and the Harlech depot is nearby — and ride an hour south along the coast of Cardigan Bay to another Mid Wales village, Aberdovey, where there’s a depot just a few paces from the first tee at Aberdovey Golf Club, founded in 1892.

Or, you can drive from Harlech to Aberdovey — Aberdyfi in Welsh — through lush green countryside, past stone cottages towered over by steep, rocky mountainsides, where white, long-tailed sheep graze on high, fenced by stone walls that seem to stretch to the sky.

Writing in the early 1900s, Bernard Darwin, grandson of the naturalist Charles Darwin and the first regular golf writer for a newspaper, the Times of London, wrote that Aberdovey was the course his “soul loved best of all the golf courses in the world.”

Earlier this month, I played both of those courses, as well as four courses in North Wales, beginning with unpretentious North Wales Golf Club, in the resort town of Llandudno, where the writer known as Lewis Carroll saw the inspiration for “Alice in Wonderland,” and nearby Conwy Golf Club, formed in 1890, on a piece of land where golf had been played as early as 1869, a course near another of Edward I’s castles and the historic walled city of Conwy, a course that was a qualifying site for the British Open in 2006 and that has hosted three European Seniors Tour events.

I played Porthmadog Golf Club, founded in 1905, where with the wind at his back a playing partner hit a 5-iron shot 229 yards off the tee and over the hidden green on the 202-yard par-3 No. 13 hole, and where the same golfer crushed driver into the wind on the 220-yard par three No. 11 hole and came up short.

I played Nefyn & District Golf Club, a course founded in 1907 and overlooking the Irish Sea, with eight holes on a peninsula, including the par-4 No. 13 hole, where you could hook a ball into the water on one side, or slice it into the water on the other, a course that conjured memories of the California coast near Pebble Beach and where I lost seven golf balls.

Along the way, on this golf adventure, I came to understand a bit of what Bernard Darwin must have felt.

Because if you’re a golfer, chances are that you’ve heard of some of these courses, but they’re not “trophy courses” like the Old Course at St. Andrews in Scotland or Ballybunion in Ireland.

Yet they are true links courses, with dunes and wind and gorse and thick rough and devilish bunkers and golden fescue framing fairways rolling with lumps and bumps, and you can play them for a fraction of the cost of the so-called trophy courses, in an area with much to offer for golfers and non-golfers, from history to picturesque villages to the scenery of Snowdonia National Park, with a range of lodgings and high-quality restaurants.

“The value for the money in North Wales is great,” said Richard Bradbury, head professional at North Wales Golf Club, which dates to 1894. “Golf here is very undervalued. I think we’re a little bit of a well-kept secret.”

Certainly, the price is right once you get there. Consider that at a time of year when the rack rate to play Bandon Dunes Golf Resort on the Oregon Coast is $310, and the tariff at Old Head in Ireland is $250, weekday rates at the courses we played ranged from roughly $53 (converting from British pounds) at North Wales and $57 at Porthmadog (pronounced Port-Mad-Oc) to $70 at Conwy and Nefyn, and $100 at Harlech and Aberdovey.

David Williams, the current captain at Conwy and a golf architect who has designed about 30 courses, said that “people don’t necessarily think of Wales and golf,” noting that of the 8,000 visitors to Conwy Golf Club each year, perhaps 20 to 30 are from the United States, and he was talking actual numbers, not a percentage.

Williams said that’s “an issue” for Wales. And it’s one those who care about golf and tourism in the nation — Visit Wales is the tourism and marketing division of the Welsh government — are trying to address in various ways, ranging from marketing to the development of new courses, such as a course built specifically to host the British Open (as Chambers Bay near Tacoma was constructed to attract a U.S. Open), which no Wales course has ever hosted, or the development of a trophy-type course in North Wales, which led Williams to study the possibility of putting a golf course atop the Great Orme, the limestone land mass that rises 680 feet over Llandudno.

Marketing approaches include the James Braid Trail, which promotes courses designed by the famous architect, including Aberdovey, Nefyn and Porthmadog, and the Snowdonia Golf Coast, including Nefyn and Royal St. David’s.

There’s a one-stop website for those who are planning a golf excursion to Wales: www.visitwales.com/golf.

“There are great golf courses, but they’re not as well known outside Europe,” Williams said. “I would say there are some great courses that if they were in other areas they would be better known.”

In public perception, Williams said, when golfers think of the United Kingdom, “Wales is No. 4 when it comes to golf,” behind Scotland, Ireland and England.

It was to help change that perception that Visit Wales invited four members of the golf media from the Pacific Northwest, including me, to play the courses.

Joining me were Blaine Newnham, the former sports editor and columnist of the Eugene Register-Guard and the retired longtime columnist for the Seattle Times; Tom Cade, senior director of communications for the Pacific Northwest Golf Association and editor of Pacific Northwest Golfer magazine, and Rob Perry, of Bellevue, Wash., a professional golf photographer. Golf-wise, we were two low-handicappers (Cade is a 2, Perry 3.6) and two not-low handicappers (Newnham 18, me 19) and so played two different tee boxes at each course.

The road to Aberdovey

Highlights of each course, in the order we played them: 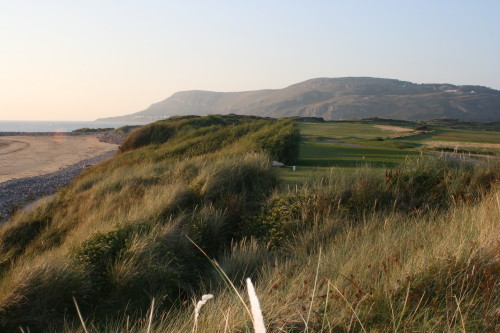 With the sea on the left, and the Great Orme in the distance, there’s a lot to consider on this tee shot at North Wales Golf Club. 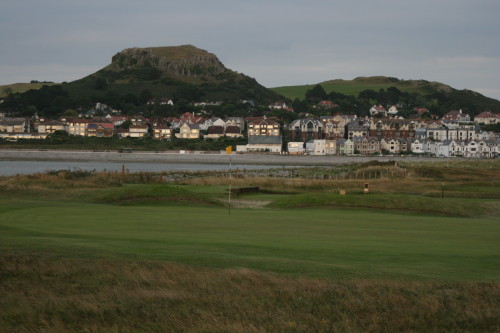 View of the River Conwy estuary and beyond at Conwy Golf Club, North Wales. 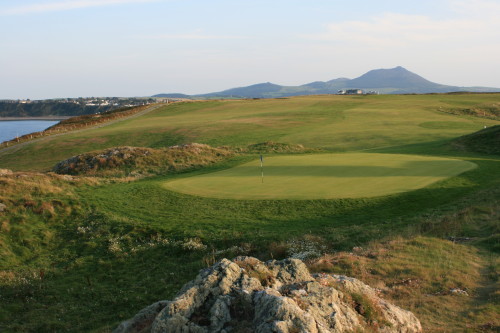 The view behind the 13th green and fairway at Nefyn & District Golf Club, Wales, with the clubhouse in the distance. 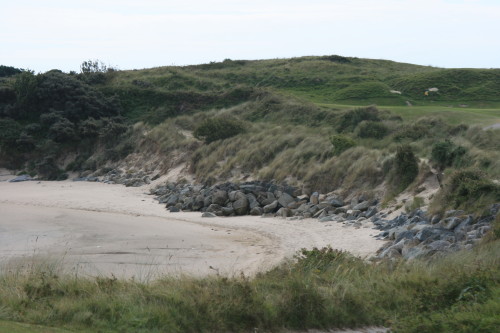 The short par 4 No. 12 hole at Porthmadog Golf Club, Wales. 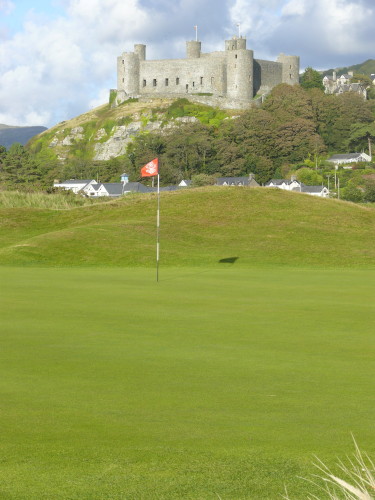 I had my best score in Wales there, an 88 with six pars and a birdie. Not bad, for a high-handicapper. Maybe it was Bernard Darwin, looking out for another old newspaper guy. 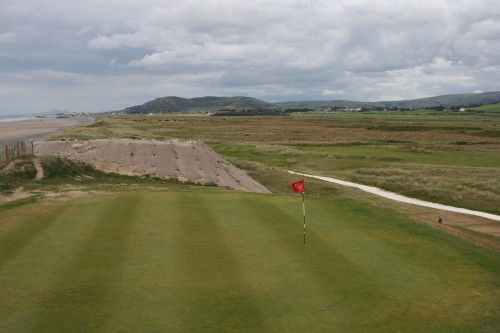 The 12th green, and view beyond, at Aberdovey Golf Club, Wales.