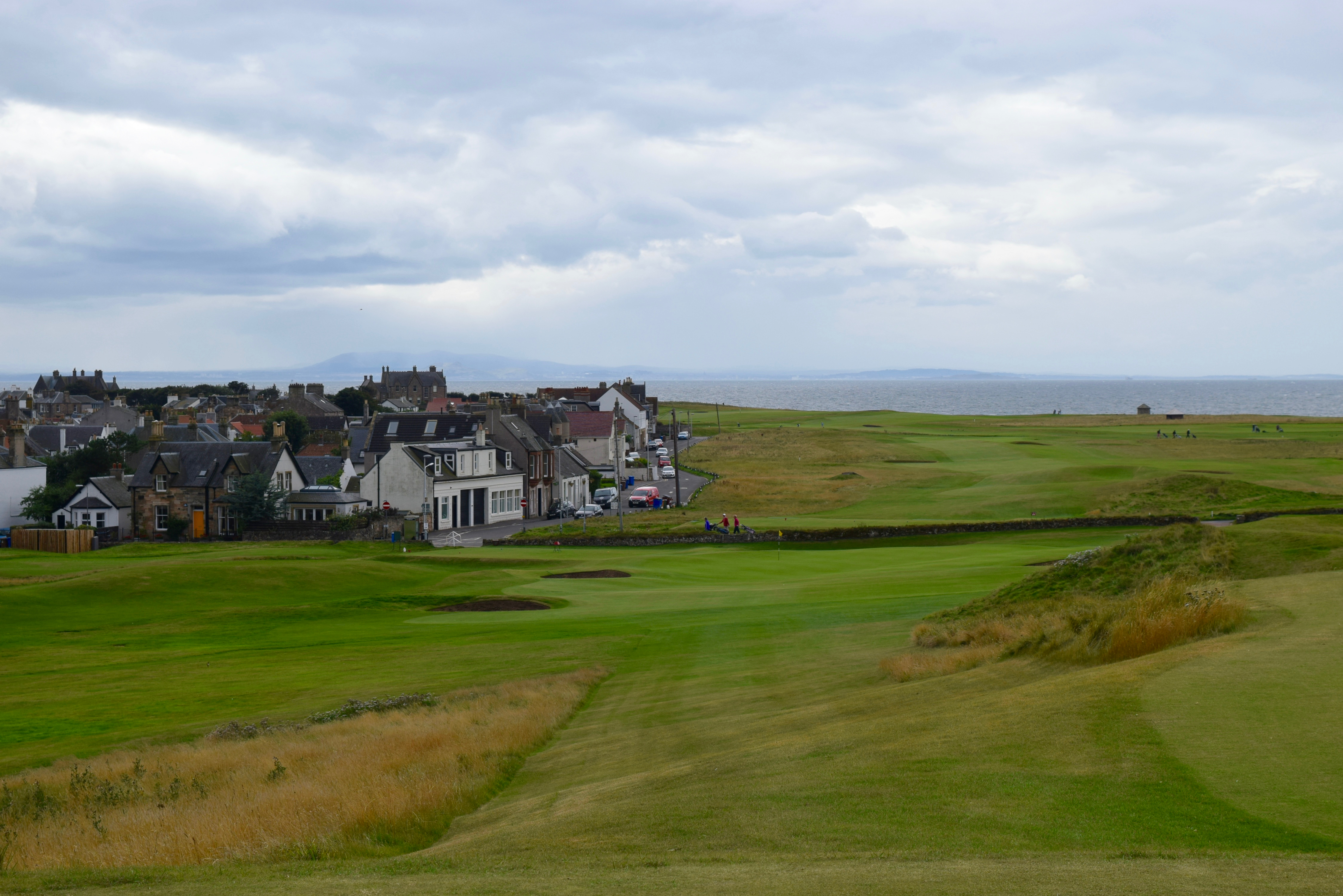 They grow up playing golf here, and have for generations

ELIE, FIFE, Scotland — Daylight was waning and the rain was pelting when we left The 19th Hole, the pub across the narrow street from the final fairway of The Golf House Club, Elie Links.

The story goes that sometimes golfers pop into the pub for a pint during a round, but we finished play and had dinner, and when we walked back into the rain, there were still players on the golf course, in the gloaming, determined to finish.

They grow up playing golf here, just 12 miles south of the Old Course at St. Andrews, the birthplace of the game. In the historic county of Fife, in the area north of Edinburgh bordered by the Firth of Tay and St. Andrews, to the north, and the Firth of Forth to the south, and the North Sea to the east, there are 50-some golf courses.

Folks here belong to golf clubs seemingly as readily as Americans get a Costco membership; it’s not a sign of exclusivity, because the fees are a pittance, by U.S. standards.

In essence, golf is a matter of community.

On the eastern tip of Fife, you drive through small villages in the area known as East Neuk and see signs for them: Earlsferry, Anstruther, and on to Crail, which has two courses, and then on to magnificent Kingsbarns, and up to St. Andrews, which has seven. They’ve played golf here, in some form, since the 1600s.

Friday, we played a wonderful example of one of those golf courses, The Golf House Club, Elie Links, a course on a stretch of linksland on the Firth of Forth where golf has been played for centuries. The Golf House Club was formed in 1875, taking its name from the golf house, or clubhouse, that was begun in the same year and completed in 1877; it was named to distinguish itself from two other clubs that played on the same course, but hadn’t built the clubhouse.

“Everybody plays golf,” said Hamish Galloway, 68, the club’s handicap secretary, who said annual membership dues are 700 British pounds, or about $930. “I know where you come from golf is an elitist game, and it’s associated with wealth and such like, but here every kid plays golf. …

“It’s part of the ethos and the culture of the society. Because golf teaches you. It’s a little cameo of life. It teaches you all about everything. That you never give up and you never know what’s going to happen, and you just hang in there, and suddenly you hole a long one and the other guy three-putts. It’s just like life. You just keep going.”

At Elie, there’s a nine-hole course adjacent to the main course that youngsters play until they are 12. “Once you can satisfy me, or those of us who run the place, that you know how to fix your pitch mark and you can put your divot back and you know how to conduct yourself, on your 12th birthday you can start over here,” Galloway said.

“We actually run the world’s oldest kids golf tournament right here on this golf course, and we charge one pound entry, and any kid from anywhere can come and play, and they all get introduced just like they were in the Ryder Cup and they all get a prize.

“It gets the kids started. We have a huge junior section, and the standard (of play) is phenomenal. … We’ve started generations of kids in golf here, and it’s all with the same philosophy — start them young, and make it easy for them, and make them welcome. And they grow into decent people.”

The Golf House Club, Elie Links, was laid out by Old Tom Morris in 1895 and in the 1920s revised by James Braid, who grew up around here. It is a par 70 that plays 6,273 yards from the white tees and 6,009 from the yellows. It has two par 3s and no par 5s and, when the wind is blowing off the Firth, and when the pins are placed here and there on the huge greens, it is not be taken lightly and, at the same time, does not take itself too seriously.

“In fact, I’ve got a letter from one of these American groups. They came and they did Scotland. They wanted to do Carnoustie and Muirfield and the Old Course and all the big tracks. And on the last day, they had nothing planned, and so they came here.

“And they wrote me — I still get choked up when I think about it — a letter that said ‘Muirfield was magnificent, and the majesty of this (course) and that, but we had a vote on our best day, and our best day was here.’

“It’s a different kind of golf, because you’ve always got a chance. You don’t have to play a long hitter to score well. And yet nobody murders it. Look at the gold medal board in the clubhouse. The winning score in the 1950s is still the winning score in 2016. They keep talking about technology and how far everybody hits it, but what defends this course is the wind, and the fact that we can put the pins in some positions where every putt has got a swing in it.

“So it protects itself.”

The course is known for its starter’s hut, which has the periscope from a submarine rising from the top; because the first fairway runs up and over a hill, the starter uses the periscope to tell the next group on the first tee that it’s safe to play away.

“It’s unique in world golf,” Galloway said. “Some people thing it’s a bit of a gimmick but the starter wouldn’t know it’s safe to play away unless he could see, and that’s how we do it.”

“On the face of it, Elie ought to be a bore. It emphatically is not. Its 16 two-shotters range from 252 to 466 yards, they run to every point of the compass, the wind is frustratingly fickle and blind shots pop up with bewildering frequency. What’s more, the greens are full of fun, the bunkers are full of woe, and the topography overall is remarkably varied.”

At the invitation and intercession of David Connor of VisitScotland, I played The Golf House Club, Elie Links, on Friday with three Northwest colleagues in golf journalism:

Of our eight days in Scotland, this was the most wind we’ve encountered, and the rain came while we were on the back nine, and under those conditions, Elie is a challenge, especially into the wind. Perry, who plays to a 4.4, was our medalist, shooting 78 from the whites, while Cade, a 1.4, shot 84. Even though several of the par 4s played under 300 yards from the yellows (there were also three at over 430), such was the terrain and the wind that Newnham and I wound up hitting driver on 17 of the 18 holes, including the 204-yard par 3 third hole.

My final drive, on 18, found long grass left and was not to be found, my only lost ball of the day, as I managed a 93 with five pars and eked out a win over Newnham, 1-up, in the daily match of former Register-Guard sports editors.

With two rounds left in Scotland, I’m one round down, and Saturday we play the Balcomie Links just up the coast at Crail, where the Crail Golfing Society was founded in 1786, making it the seventh-oldest golf club in the world, and where Old Tom laid out the course in 1895, and where golf has been played for generations upon generations.